Is Coca-Cola a social enterprise now? Why ‘development’ needs to be more critical with global corporations 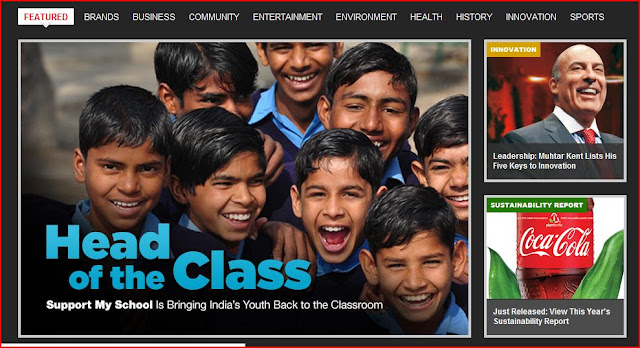 When Coca Cola launched its new website Coca Cola Journey a few days ago, marketing and social media experts a nd even j ournalists at the New York Times were full of delight about the future of brand communication : T he company known for decades for promoting its flagship brand as “the pause that refreshes” is refreshing its corporate Web site for a new century, adopting an approach and attitude more akin to a consumer magazine than a business portal. The new design is closer to a magazine, with content for consumers. The company is, of course, Coca-Cola, which plans on Monday to give its site a makeover that executives describe as the most ambitious digital project they have undertaken. And if you visit the website you may think that you arrived at some philanthropic endeavor , a social enterprise or foundation maybe. Smiling non-white children in blue school uniforms (usually one of the best ‘development indicators’...), a corporat
Post a Comment
Read more

November 08, 2012
Hello all, Welcome to the 50th anniversary post of my weekly link review! Before I jump to the 'business as usual' part, I'd like to say thank you to all of you for visiting and re-visiting this humble effort and sharing great stuff. What I did not fully realize at the start almost a year ago was that a commented link review is actually quite a bit of work. However, I will continue to comment and share 'purposefully' rather than just dropping off a bunch of links. As always, I like to hear from you - about great new blogs, topics I keep missing or shout outs of how enjoyable these weekly posts are ;) Enjoy the next 50 weeks! New on aidnography OLPC in Ethiopia: The thin line between digital innovation, cargo cult and peoples on parade Development Maps before maps Amanda Uren has a fun collection of map-like scans from the 11th century. Some of them are geographic, but most of them are more like rough sketches of how the individual saw the area the image represe
Post a Comment
Read more

OLPC in Ethiopia: The thin line between digital innovation, cargo cult and peoples on parade

November 05, 2012
It is quite remarkable that the article on One Laptop Per Child’s experiment in Ethiopia at M IT's Technology Review is framed in a very technological, maybe even ‘nerdy’ language around hardware and software, Android and hacking without very litt le social gr ounding: Earlier this year, OLPC workers dropped off closed boxes containing the tablets, taped shut, with no instruction. “I thought the kids would play with the boxes. Within four minutes, one kid not only opened the box, found the on-off switch … powered it up. Within five days, they were using 47 apps per child, per day. Within two weeks, they were singing ABC songs in the village, and within five months, they had hacked Android,” Negroponte said. “Some idiot in our organization or in the Media Lab had disabled the camera, and they figured out the camera, and had hacked Android.” I am fully aware of the fact that this is a short article and far from a being comprehensive report with all the details, but still the a
5 comments
Read more

November 01, 2012
Hello all, African governance issues, personal branding, reflections on the 'purity' of life & development, the Post-2015 development ag enda and a noteworthy new report on how teens (wh o may be joining your development course soon) do research in a digital world - interesting variety of topi cs and p ieces to read, share and discuss...I hope. Enjoy! New on aidnography The rough guide for setting up fake-ish academic conferences Like many academics, I receive invitations to obscure global conferences on a fairly regular basis. They usually go hand in hand with links to so-called ‘open access journals’. Since I may get into legal trouble singling out specific conferences or organizers I felt inspired to write down a few essential criteria that ensure your conference will not be taken seriously by the academic community By a strange coincidence, just when I posted my post yesterday, I came across The B-list conference circuit I’m beginning to think it isn’t worth i
Post a Comment
Read more

The rough guide for setting up fake-ish academic conferences

October 31, 2012
Like many academics, I receive invitations to obscure global conferences on a fairly regular basis. They usually go hand in hand with links to so-called ‘open access journals’. Since I may get into legal trouble singling out specific conferences or organizers I felt inspired to write down a few essential criteria that ensure your conference will not be taken seriously by the academic community: 1. Set up a website – it should be a simple html-site based on a design template from 1997 (for inspiration, here's a link to my previous post on dodgy open access journals ); make sure it’s not linked to a university, organization or association (.com is the way to go!); don’t let a native speaker proof-read your announcement. 2. Make sure that you don’t have a specific title for your conference and that it covers whole disciplines or ideally more than one! Global academia is inclusive and interdisciplinary. The ‘annual conference on social science, economics, politics and humanities’ w
Post a Comment
Read more

October 25, 2012
Hello all, Maybe I should rename this post to 'links I dislike' , because there are really a few links I like for the fac t that I can disagree with them, e.g. refer ring to Rio Tinto as a 'shared value' development partner, or doing research on failed project management in Africa. And Bono's 'humbling realizations' are not that humbli ng after all, but then again, he it the Bon o-Man...enough with the ranting, th ough . Do check out a n interesting piece on remittances, agree with Duncan Green on why conferences are so bad and indu l ge in some guilty-pleasure reading around huma nitarian dating, plus there are funny academic-nerdy tumblrs, too! Enjoy! New on aidnography How do we help? (Book review) Even less than great introductory texts on the 'aid industry' deserves a proper review... Development How do I get started in a career in development? I plan in the coming months to provide a series of interviews and discussions with development prof
Post a Comment
Read more

How Do We Help? (book review) There is a fair amount of competition for attention on introductory texts on the history and con cepts of ‘development’. Since a new academic year has started recently and students (and teachers...) are probably already overwhelmed with literature I decided to add two more titles to pote ntial reading lists. Patrick Develtere’s ‘ How Do We Help - The Free Market in Development Aid ’ is the first one and a second new textbook review will follow soon. I liked the idea of reading a textbook from a continental European academic as opposed to Anglo-Saxon writing that dominates the market. But in all fairness, ‘How Do We Help’ is only a partial success and recommendation. Right from the introduction I had difficulties understanding the ‘free market’ notion that is hinted at in the subtitle. As far as I could tell from statements like we seek to demonstrate that at present the market dimension has gained the upper hand at the expense of the arena, and especially at the expen
Post a Comment
Read more
More posts