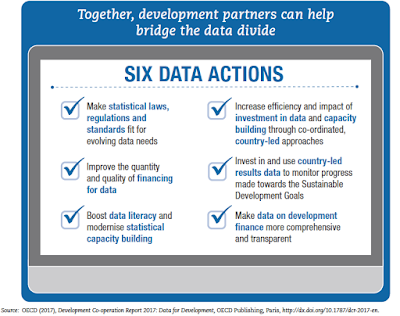 I just read through the first 135 pages of the recently released 320 page OECD Development Co-operation Report 2017-Data for Development . The first part Making data for development is followed by detailed profiles of all the members of the organization’s Development Assistance Committee (DAC) which I am skipping for the moment. Besides a general discussion about the value of annual ‘flagship reports’, the document is an important artifact to learn more about the consensus that an organization like the OECD presents when it comes to a topic like data for development. The report is visually appealing, chapters are well referenced with contemporary literature and most of them provide good summaries of the topic. And the overarching message that good data systems to achieve the SDGs are important and often lacking is a necessary reminder for the OECD-DAC community. But as a researcher and teacher I am also interested in approaching such a substantial document with a critical, perha
Post a Comment
Read more

October 20, 2017
Hi all, Development news: The UN & the Rohingya crisis; Africa is too expensive for manufacturing; how Angelie Jolie almost had a dinner date with Joseph Kony; Hungry kids don't learn well; a critical review of the WDR; Rwanda stops second-hand clothing imports; inside the shady adoption industry; how Puerto Rico has been screwed over; an art exhibition fail in China; female development economists; art & sexual violence; lingerie from Nigeria; undergrads meet local aid worker.   Our digital lives: The Leila Janah complex; how to win the Booker prize? Academia: Harassment and field research. Enjoy! New from aidnography  The Lomidine Files (book review) The story of Lomidine (also known as pentamidine), a ‘wonder drug’ thought to prevent sleeping sickness that was applied throughout colonial Africa in the 1940s and 1950s, is so much more than just an impeccably researched and vividly presented case study of medical anthropology. It is a historical inquiry into the ver
Post a Comment
Read more

Guillaume Lachenal’s The Lomidine Files-The Untold Story of a Medical Disaster in Colonial Africa , expertly translated by Noémi Tousignant, has been one of the most interesting books I have read so far this year. The story of Lomidine (also known as pentamidine), a ‘wonder drug’ thought to prevent sleeping sickness that was applied throughout colonial Africa in the 1940s and 1950s, is so much more than just an impeccably researched and vividly presented case study of medical anthropology. It is a historical inquiry into the very essence of how the French colonial state ‘worked’ and how a socio-political apparatus armed with a hubristic believe in the power of medical science subjugated native populations to dangerous medical interventions. Killing dozens of recipients, the mirage of a preventive wonder drug was eventually uncovered to be medically faulty and the story of Lomidine was hidden in public and corporate archives of the drug manufacturer. My broader aim, however, is more
Post a Comment
Read more

October 05, 2017
Hi all, In the end, I managed to pull a new link review together for this week!  Quite a few examples of development communication #fails, but also encouraging pieces on journalism in Nigeria and Afghanistan, female leadership in the UN system and personal & organizational well-being. Plus new publications and contributions on the digital condition of life, work & teaching! Enjoy! New from aidnography Reading #Maria through a #globaldev lens This time another American territory is affected among other islands many of which still have links to European countries through various statuses as overseas territories. So new questions are emerging in the aftermath of a natural disaster of how 'them' and 'us' are linked, how humanitarian challenges are not just an issue of the 'North' helping the 'South' and how questions of development thinking and research are becoming even more important as climate change creates a truly global community of sufferi
Post a Comment
Read more
More posts