Showing posts from March, 2013
Show All

March 28, 2013
Hello all, This week's review is quite an eclectic mix - including cats and sex (in the blog-appropriate form of ethnographic research on Ugandan Internet memes and a 'sex strike' of Indonesian women for conflict resolution). But there's more for the forthc oming long holiday weekend! New publications, how drones impact development work, the media's non-engagement with the conflict in Mali, what people think is the most effective tool to curb corruption, BRICS and the new global capi talist imperialism, lazy aid journal ism around UK's Red Nose campaign as well as ref lections on the precious work-life balance. I already mentioned that chicke ns and g oats are the cats of the Ugandan Internet and last not le ast, some reflections on how 'post -publication' (peer) review can work th rough social media . And there's more! Happy holidays! New on aidnography Paved with Good Intentions–Canada’s development NGOs from idealism to imperialism (book review
Post a Comment
Read more 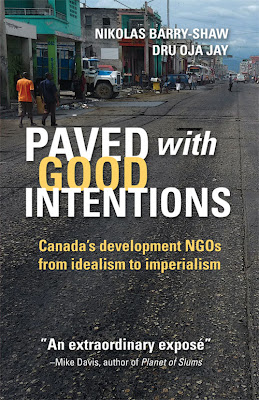 S trange how reality works in mysterious ways sometimes: While I had started f eeling guilty that I had not started to read and review Nikolas Barry-Shaw and Dru Oja Jay’s book Paved with Good Intentions – Canada’s development NGOs from idealism to imperialism , the current discussions around a potential dissolution of CIDA give the book an even more contemporary relevance as it gets ready for the second printing. The book tells and important – and certainly not just limited to Canada! – story about the changing relationships between the s tate, civil society, NGOs and, depending on your political viewpoint, the professionalization/ depoliticization /selling out of this growing sect or of the global aid industry. The book attempts to, and often successfully manages, to bring together three narratives ab out the history of Canadian NGOs, neoliberal politics and a focus on the situation in Haiti where the authors were involved as a cross-cultural activists. Before I will go into
Post a Comment
Read more

March 21, 2013
Dear all, I have been a bit busy this week - for all the right and good reasons - and fresh & exciting content will be added very soon! In the meantime, enjoy some great reads! Although there are some great reads on techn ology, learnin g and social change featured in this week's review (includin g a great ethnographic piece on ' performing success' in the context of OLPC) you should definitely check out very in teresting reads on new research that suggests that corporations from the unhealthy commodities industry should have no place in policy-making , 'feel-good activis m' and the moral complexities between 'inquiry and insult' when part icipating in an exercise s uch as the 'Two Dollar Per Day Challenge' (i.e. pretending to be poor when you really aren 't...). If yo u are still curious, do check out a good Bono-bashing piece and the inaugural open access issue of the new Peacebuilding journal! Enjoy! Development Lancet Article Highlights
Post a Comment
Read more

March 14, 2013
Hello all! Welcome to another great weekly link review! The 'development' section features some interesting material in cluding whether the mistreatment of children i n conflict zones is a perv erse form of acceptable child abuse, how advocacy campaigns can have an impact an d the role of IR scholars and scholarship and the war in Iraq . There are two excellent pieces on the impac t of voluntourism on children in Ghana and the rituals of UN policy summits (this time it's the Commission on the Status of Women). There 's also a special ' not-really-development-related-but-still-interesting-section' this week to change things a little bit... the p ieces on how to critically engage with 'research', how to deal with advice and how to work in the post-employm ent economy are all worthwhile reads. Finally, in 'Academia' a n anthropology adjunct talks about his profess ional dead-ends and why getting a tenured job feels like becoming a Broadwa y da nce
Post a Comment
Read more
More posts