Showing posts from September, 2021
Show All

Hi all, I am fortunate to have such a great & generous network! Giulio from NRC , Khalifa & Ragy from the Dignified Storytelling Alliance plus Val from Amnesty together with Dante from IFRC presented their work, shared reflections on digital humanitarian communication & discussed with our students on Thursday! Such a great day! It is also Friday so time for some food for reading-a lot on widening/broadening inequalities due to platform capitalism, but as always much more to explore... My quotes of the week The same economy of clicks determines the fates of refugees across the Middle East. Forced to adapt their sleeping patterns to meet the needs of firms on the other side of the planet and in different time zones, the largely Syrian population of Lebanon’s Shatila camp forgo their dreams to serve those of distant capitalists. (Refugees help power machine learning advances at Microsoft, Facebook, and Amazon) We call this “Peace from the hands and in the likeness of w
Post a Comment
Read more 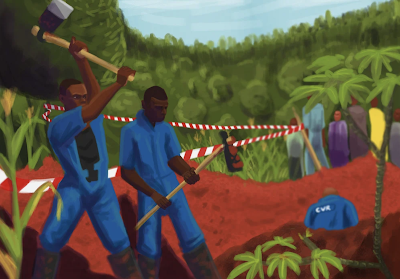 Hi all, Another week is wrapping up and between friendly, collegial editorial meetings, teaching on topics I really enjoy & discussing literature with students this academic life is sometimes not too bad...I hope you also had a great week; unfortunately, there is not a lot of light reading in this week's #globaldev review, but important topics from the rise of processed foods, to sexual violence in the UN & the emotional toll of 'dirty work' are yet another reminder that social change & justice efforts don't have breaks... My quotes of the week U.N. staffers past and present told me they feared that if they spoke up in the current atmosphere, they would be contributing to the dismantling of an organization many of them had first revered as Model U.N. participants. Several (...) described how their identities were enmeshed with an organization that was deeply flawed but also genuinely beloved. (The U.N.’s Own Humanitarian Crisis) Press’s cases are diverse an
Post a Comment
Read more

Listening to a 6-minute-long piece on German public radio Deutschlandfunk Kultur reminded me how truly global humanitarian responses have become. Journalist Vivien Leue visited the Ahrtal region that was hit by recent floods and spoke to residents and major charities aiding people about the challenges of rebuilding after July's disaster. A recent article by Deutsche Welle, German flood victims left traumatized as climate crisis looms, also highlights some of the key humanitarian issues that are emerging now. Even though the radio piece is relatively short I was struck how familiar many of the issues sounded compared to the discussions humanitarian and development experts have had for many years and after many crises. Waiting for money More than 430 million Euros have been raised for the victims of the flooding and one of the key questions about two months after the events that killed 103 people remains on how to connect people waiting for aid with the substantial donations. “I
Post a Comment
Read more

Hi all, We welcomed almost 170 students to our ComDev courses this week, so the link review is a tad bit shorter than usual at the end of a long week...but from Afghanistan to Colombia, Mexico, Abu Dhabi, the UK, biometrics, the HR department & breast feeding we are visiting many contentious spaces around the globe... Enjoy! My quotes of the week We must also oppose the practice of the northern aid industry to consistently place themselves as the managers, implementers, intermediaries and monitors of aid, whether white or people of colour. (Racism doesn’t just exist within aid. It’s the structure the sector is built on) Insofar as keeping your staff happy makes sense for maintaining a productive and docile workforce, HR are our champions. But shorter hours, higher pay, more control? That’s not in the purview of a department with our employer’s interests at heart. (The HR department are not your friends) Development news How elite US institutions created Afghanistan’s neoliberal Pre
Post a Comment
Read more
More posts