Showing posts from January, 2016
Show All

January 29, 2016
Hi all, This first link review of the new term gives me the pleasure to welcoming all our new & returning ComDev students! It just so happens that this review aligns quite nicely with some of the seminar discussions we has had and will have next week! In Development news we are looking at more commentary on the World Development Report; a new report on the power of the Gates foundation; how to communicate the refugee situation; Lesotho & development; the story of the (humanitarian) tarp; how aid work can strength empathy at home; how to improve UN’s systems to deal with corruption; how to manage projects, people and results in contested development spaces; ITU on IoT; Our digital lives features predatory bureaucratization; big data & the ethnographer & the fear of screens. Lots of new readings , including the first open access IDS Bulletin; new study on how misinformation spreads; handbook on Twitter & research, social media in Uganda and why paying teachers more
Post a Comment
Read more 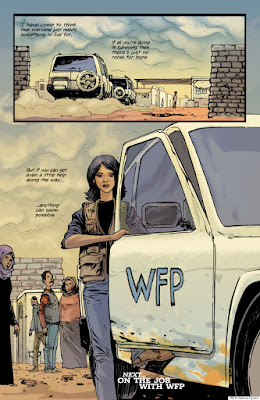 Similar to J. who already posted some reflections on the WFP-sponsored graphic novel Living Level-3: Iraq my first impressions of the novel (or the first four parts that have been published on the Huffington Post so far) are relatively positive-with a few caveats, of course. Aid work as outdoor life When WFP expat aid worker Leila, an American citizen, declares Back home I had everything I could want but still felt lost somehow like I needed purpose I already had an eye-rolling moment right at the beginning. Maybe I have to blame the genre ‘graphic novel’ for this, but I found the writing generally much weaker than the visualizations and the overarching elements of the story. But as one commentator summarized on facebook ( admittedly in a more s arcastic way (see her comment below) : I'd be happy to hire this aid worker. She's kick ass, cool, smart, sensitive and a real do-gooder. Her job as a junior VAM (Vulnerability Analysis and Mapping) officer takes Leila
2 comments
Read more

January 18, 2016
Hi all, On the official first day of the spring term I am particularly welcome our 150+ new and returning ComDev students who have enrolled in one of our four modules that start today! To add a few more interesting items to your reading lists I am glad I can share a fairly substantive link review that features many areas and themes that cover the content of the course, our research themes and pedagogical engagement. We start Development news with a bit of aid satire; ‘Secret aid worker’ on quitting the industry; ‘The Internet’ is not an equalizer; Unicef & Skype in the classroom; Nestle & slave labor; the unregulated volunteer travel industry; a must-read from Medium’s ‘Development Set’ blog. Our digital lives on how Silicon Valley elites think & how to live in the time of the gig economy. New papers on big data and development, policy makers’ use of research & digital journalism predictions are hot off the digital press . Finally, in Academia we confirm why blogging
Post a Comment
Read more

Have a peek at peeps magazine! 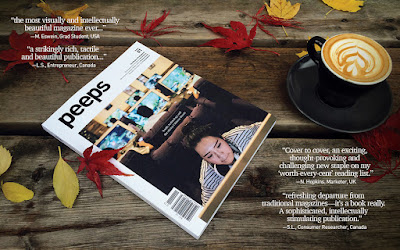 If I were to describe the first issue of peeps magazine that the editorial team kindly had sent to me in one word I would go for ‘unpretentious’. The magazine is jam-packed with really interesting contributions that bring an ethnographic depth to a wide range of culture and communication subjects and the layout, texts and photos form a coherent and very calming symbiosis. When I was flicking through the pages I really wanted to stop and start reading to learn more about ‘The Modern Protagonist’, the sub-title of the first issue. Eve Houghton kicks off with an interesting anecdote on ‘How to Bank in Kimbe’ that quickly moves into the broader social fabric of Papua New Guinea and how 21st century technology meets traditional village courts. As with most good research-informed writing there is not really a catchy punch line, no ‘ICT4D is changing everything’ or ‘technology is destroying beautiful traditions’ conclusion. This approach continues throughout the magazine: There is a be
Post a Comment
Read more

January 08, 2016
Hi all, The first week of 2016 has been quite fruitful reading-wise and I am happy to share my first review of the New Year! Development news : Medium launches a new project on ‘The Development Set’; communication trends not just for NGOs; is the aid system broken?; don’t use refugees for vanity storytelling projects; how open source software helped to end Ebola; World Bank discovers political economy of evidence; engaging with girls’ digital privacy; HRW and its unpaid intern rebellion; play bullshit bingo with philanthroentrepreneurship! Our digital lives : The cultists of the Silicon Valley; investigative reporting and positive change Academia : Elsevier, predicted obsolete in 1995, is alive and making billions of dollar; the LSE blog offers thoughts on the reverse skills-gap and creating transferable people; reflections on the hegemony of elite institutions and graduates; reflections on peer review (are we fetishizing journal publishing too much?!) Enjoy! New from aidnography My d
Post a Comment
Read more
More posts