Showing posts from May, 2016
Show All

10 must-reads on the Angelina Jolie-LSE-professor debate

May 29, 2016
Hi all, Since I shared my post on the topic, lots of other interesting posts, comments and hints at previous academic contributions have been shared and in the spirit of curatorship as academic practice , I am highlighting a few in this post. What happened? Angelina Jolie gets new role as visiting professor at LSE The Hollywood actor and director has been appointed a visiting professor at the London School of Economics, teaching a course on the impact of war on women. From 2017, Jolie will join the former foreign secretary William Hague as a “professor in practice”, the university announced on Monday, as part of a new MSc course on women, peace and security, which LSE says is the first of its kind in the world. Esther Addley from the GUARDIAN kind of broke the news last Monday (23 May). Outrage at the LSE's appointment of Angelina Jolie is nothing more than academic snobbery The objection to Jolie Pitt’s arrival at the LSE is nothing more than snootiness from those who cherish
Post a Comment
Read more

May 27, 2016
Hi all, Welcome to a jam-packed end-of-the-week link review! Development news on Professor Angelina; #allmalepanel; finding a new WHO Director; the holy grail of ‘less paperwork’; UN bureaucracy; unpacking digital privacy; teens in Nepal and the stigma of periods; development journalism; the ‘tomorrow’ after WHS; better voluntourism; Vogue and aid romance; the ‘non-place’ of Angola’s uninhabited modern city; Digital lives on how Air B’nB is destroying Iceland’s rental market New publications on educational development and how mainstream news report global issues. Academia on peer-review and academic citizenship Enjoy! New from aidnography Why you should be critical of Professor Angelina Jolie Pitt’s LSE gig There is nothing wrong with an entertaining lecture, but in the age of TED talks, Hans Rosling visualizations and a higher education sector that is now less ‘ivory tower’ than it ever was, we have to critically assess how ‘fun’ university studies can and should be. That is pa
Post a Comment
Read more 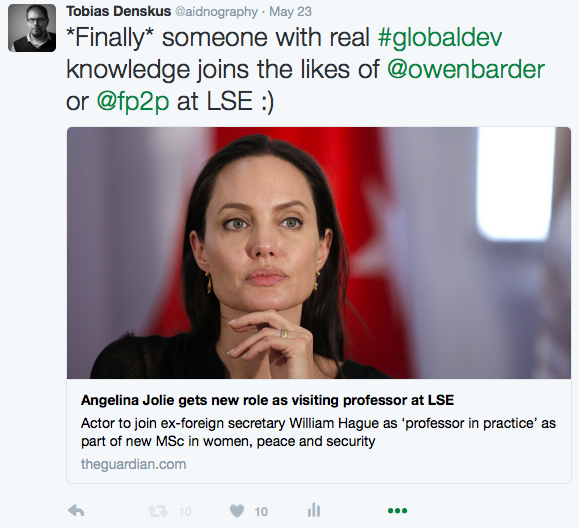 The message of Angelina Jolie’s appointment as Professor of Practice in LSE’s new MSc course on women, peace and security has probably been shared and commented on more widely than detailed news from the World Humanitarian Summit . Aid workers and academics alike shared critical comments and it is worth to engage a bit more comprehensively with the underlying issues of academic corporatization and the celebritization of aid work and development research/teaching. Hannah Fearn’s comment that over-sensitive inhabitants of the ivory tower should drop their ‘ academic snobbery ’ is a rather short-sighted critique of some of the broader issues that culminate in ironic facebook comments or snarky Tweets: Timing and context It is important to look beyond general comments such as ‘universities always had practitioners joining their classes’ or ‘Angelina Jolie knows a lot about the subject’ and at the specific context of this announcement: The UK now has the highest tuition fees in the OE
Post a Comment
Read more 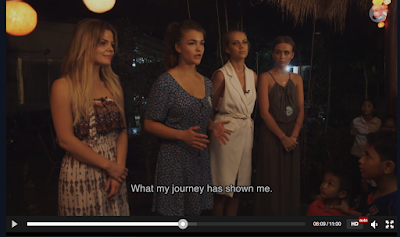 Hi all, I'm a bit proud of myself that the Link Review has become a regular weekly feature again amidst the approaching grande final of the semester! Development news with more great career advice; sexual harassment at ICT4D events; the second disaster of unwanted donations; migrant brides-it’s complicated; World Humanitarian Summit is a mess (file under ‘Breaking news’…); celebrities and designer activism; Our digital lives on people and ideas that make it into rankings and not beyond; knowledge economy myths; OKCupid data ethics. A detailed analysis of communication in Sierra Leone is Hot off the digital press . Academia with data, metrics and publishing capital(ism); and an anthropological take on Beyonce’s fashion brand disaster. Enjoy! New from aidnography Development tourism without adult supervision-Reflections on Aftenposten’s Sweatshop documentary I like the idea that a group of young women takes initiative, is active, inquisitive, speaks up and talks on the
Post a Comment
Read more 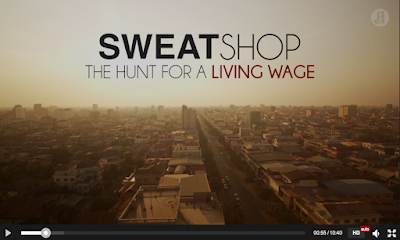 I just watched the second season of Sweatsho p , a documentary produced for the Norwegian newspaper Aft e n posten (with English subtitles). Four No rwegian fashion bloggers continue their investigation into the garment industry in Cambodia and their quest to lobby for a living wage for factory workers after sp ending the first season inside sweatshops . Spoiler alert: Not much really happens in the 45 minutes the viewer is allowed to travel with the four young female fashion bloggers and yet, the documentary is an interesting case study in the context of ‘communication for development’. While I will be critical and while it is difficult not to personalize the review, I do not want to expose the four fashion bloggers. They are playing a role, they have good intentions and they seem genuinely compassionate about the women and their lives they encounter during the journey . Aesthetically, the documentary moves between music video imagery, gap-year tourism and an often pseudo-i
1 comment
Read more

May 13, 2016
Hi all, Development news starts with 2 powerful pieces on orphanage tourism and a sustainable future for global volunteering; how aid became big business; #allmalepanels and introducing female speakers; aid corruption in Turkey and Syria; risk management manuals are not all bad; tobacco firms supported AIDS agenda to distract from their product. Digital lives on Re:Publica; writing in a violent world & India’s urban social media stupid. Academia with a Canadian university's bold move to cancel 2000 Springer journals; how to comment on a draft policy paper; interview with the UNESCO chairs for community based research & it was never easy to find academic employment. Enjoy! New from aidnography Bei #allmalepanels geht es um mehr als um (nicht) redende Frauen In a guest post for my German colleague Claire Grauer I summarize the #allmalepanel debate and add a few basic 'dos' and 'don'ts' about panel diversity. Development news Children as products: the re
Post a Comment
Read more
More posts