Showing posts from April, 2011
Show All

April 28, 2011
I know, I know…I actually blame it on my new ebook reader. I have really increased my readload in the past couple of weeks and hugely enjoy reading books electronically and writing about ebooks and academic publishing . So that’s why there is another of those ‘development reviews’. But, on a more serious note, I do enjoy reading books that are not directly related to development, but still help me to think and reflect about some interlinked and intertwined issues between development and other parts of society, different times in history or simply different ideas. The buzz around Kaplan’s and Duflo’s recently published books is interesting to observe and maybe that’s another reason why my reading is going into a different direction. So Michael Codella and Bruce Bennett's Alphaville. The title and subtitle basically say is all: Alphaville: 1988, Crime, Punishment, and the Battle for New York City's Lower East Side . The book reminded me of ‘The Wire’ minus the broader politic
Post a Comment
Read more

The Thank You Economy – a development review, part 2/2

April 22, 2011
This is the shorter and more practical second part of my take on the Thank You Economy (TYE) and its value for discussing some of the current and future developments of aid, especially around the ‘social’ aspects and ‘development 2.0’. The first part focussed on the actual book review and some general observations. Just a brief reminder of what Gary Vaynerchuk means by TYE: In short, [companies] are going to have to relearn and employ the ethics and skills our great-grandparents' generation took for granted, and that many of them put into building their own businesses. We're living in what I like to call the Thank You Economy, because only the companies that can figure out how to mind their manners in a very old-fashioned way and do it authentically are going to have a prayer of competing. Note that I said you have to do it authentically. I am wired like a CEO and care a great deal about the bottom line, but I care about my customers even more than that. That&#
Post a Comment
Read more

Why having a computer is not enough-Does the World Bank use aid transparency to avoid tough debates on internal accountability?

April 20, 2011
I am little bit surprised that I have not come across more critical writing on the recent World Bank-IMF spring meeting that took place in Washington, DC last week. However I did notice some engagement in the preliminary official civil society policy forum , most notably Jennifer Lentfer’s engagement . The other piece was a contribution by Huff Post blogger Rebecca Harris ‘ Knowledge Is Power: Transparency and ParticipationWill Be the Drivers of Effective Development ’ which openly promotes the official World Bank discourse about a changing, more transparent and accountable Bank. If this is how large aid organisations will interpret the ‘OpenAid’ discourse, it will stay at the level of ‘data CSR’ without having an impact on actual organisational accountability or transparency (the Swedish, quite literally, are a visible proof how the access to aid data can be made easy and approachable even for non-academic experts on this topic). There are two very interesting points to point out wi
3 comments
Read more

A picture says more than...what the UN looks like 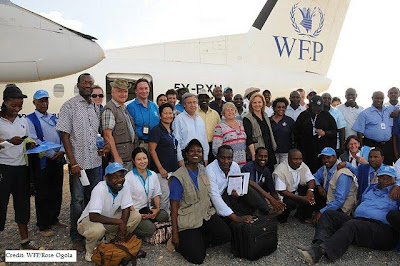 Sometimes there are these rare moments when the anthropologist in me gets really excited. A friend of mine who works for the UN in Kenya allowed me to share this fantastic artefact, a picture taken at the end of the visit of three senior UN officials, WFP's Josette Sheeran, UN Women's Michelle Bachelet and UN High Commissioner for Refugees António Guterres to the ‘ world’s largest refugee camp ’ in Dadaab. It’s global multiculturalism in a nutshell; if somebody asks me ‘what does it look like to work for the UN?’ I will say ‘just like this’:
Post a Comment
Read more

The 'business' of international media. What if the WSJ dumbed down development, then bragged about the ensuing discussions?

April 13, 2011
I wish Jonathan Starr good luck with his project and hope that his boarding school in Somaliland will have a positive impact on its graduates, their lives and livelihoods. However, as much as I will try to avoid to write a rant in response to his comment in the Wall Street Journal on 'The "Business" of International Aid' I found his article interesting and note- and critique-worthy as part of the broader 'DIY aid' debate. Yes, other former executives from the business world have had the idea before to go to a development country and 'fix' some of the things that international aid obviously has not been able to fix yet. 'Leaving Microsoft to Change the World: An Entrepreneur's Odyssey to Educate the World's Children ' is another example and also involves schools, children, textbooks and in this case Nepal. And of course Jonathan is pointing out a few key problems that many in the 'industry' are struggling with everyday-a fact he
7 comments
Read more

When the French philosopher Marc  Augé coined the term ‘non-place’ he was not exactly talking about international development. The places ‘which cannot be defined as relational, historical, or concerned with identity’ (pp.77-78) are ‘prevalent in [the] supermodern and Jamesonian “late-capitalist” society as spaces created for specific ends, such as commerce or transportation’ (Mark Matienzo: The ethnology of nowhere, everywhere. Marc Augé's Non-places as an analytical tool for supermodern ahistory and transience). In today’s aid world these may be predominantly places where expat aid workers pass through such as airports, capital city restaurants, hotels, places for R&R, global meetings or, arguably, the ‘blogosphere’ . Travelling, movement, acceleration and speed are fundamental traits of non-places as Augé exemplifies the non-place as the fundamental experience of the traveller through space, ‘a simultaneous distancing from the spectator and the spectacle’ (p.92). Th
Post a Comment
Read more

The Thank You Economy – a development review, part 1/2

April 09, 2011
I came across Gary Vaynerchuk through the South By Southwest ( SXSW ) conference and decided to have a look at what an expert on social media and marketing has to say and whether and how it may actually be relevant for international development (synopsis of book; Amazon link). It is a quick and interesting read to catch up with some key developments of social media, get some practical insights from a range of case studies and a more comprehensive picture of the future Thank You Economy .  The Thank You Economy is about something big, something greater than any single revolutionary platform. It isn't some abstract concept or wacky business strategy—it's real, and every one of us is doing business in it every day, whether we choose to recognize it or not. It's the way we communicate, the way we buy and sell, the way businesses and consumers interact online and offline. The Internet, where the Thank You Economy was born, has given consumers back their voice, and the tremendou
Post a Comment
Read more

April 01, 2011
I just finished reading Greg Grandin’s excellent book ‘ Fordlandia: The Rise and Fall of Henry Ford's Forgotten Jungle City’ . The synopsis from Amazon gives you a good overview over the contents of the book: Proving that truth can indeed be stranger than fiction, Fordlandia is the story of Henry Ford's ill-advised attempt to transform raw Brazilian rainforest into homespun slices of Americana. With sales of his Model-T booming, the automotive tycoon saw an opportunity to expand his reach further by exploiting a downtrodden Brazilian rubber industry. His vision, the laughably-named Amazonian outpost of Fordlandia, would become an enviable symbol of efficiency and mark the Ford Motor Company as a player on the global stage. Or so he thought. With thoughtful and meticulous research, author Greg Grandin explores the astounding oversights (no botanists were consulted to confirm the colony's agricultural viability) and painful arrogance (little thought was paid to how nativ
2 comments
Read more
More posts