WhyDev guest post: The state of HR in development work 2013

February 14, 2013
Last week, Brendan Rigby and I publ ished a post tog ether over at Wh yDev.org , reflecting on People in A id ’ s annual report ‘ The State of HR in International Humanitarian and Development Organisations’. I a m highligh ting a few key excerpts below, especially on making sense of ‘ Generat ion Z ’ and that new HR challenges in the aid industry need to be discussed further in the context of academic institutions and development studies courses. You can read t he full post here: Bringing sexy back: the state of HR in development work 2013 (...) One of the biggest challenges that the report tries to address is that it shares best HR practices and presents humanitarian HR as a professional managerial discipline within the aid industry. When it comes to teaching, training and mentoring (see for example the case study on Save The Children’s cooperation with executive management coaches for new country directors, p.15) humanitarian HR certainly tries to look at ideas from other sec
Post a Comment
Read more

February 07, 2013
Dear all, Due to a longer post o n The Global Journal 's Top 100 NGO ranking (see below) and another forthcoming piece co-written with WhyDev 's Brendan Rigby, this week's link review is a bit shorter than usual. That doesn't mean that there aren't some interesting, thoughtful pieces included, of course. Jemima Sherpa 's reflections on gr owing up as an upper-middle class girl in Kathmandu raises some interesting questions about old and new 'elites', the limits and dark sides of global cosmopolitanism, (post-)modernity and how live is different and at the same time the similar for many girls and women around t he globe -all written in a much more thoughtful and poetic style. In some ways almost the opposite is Enrique Mendizabal 's long essay on Think Tanks in Latin America and how they have been changing over time. And in the academic department, Eunice Williams describes her 'Life as a Job-Market Captive', with an interesting discussion
Post a Comment
Read more

February 06, 2013
It is probably fair to say that T he Global Journal ’ s Top 100 NGO r anking had a bit of a bumpy start. When it launched th e first edition in 2012, Dave Algoso’s critical post and editor Jean-Chr istophe Nothias ’ harsh critique quickly dominated the virtual perception in the aid blogosphere. So when the second edition was published in January 2013, vaguely hinting at ‘innovation, impact and sustainability’ as key new criteria to assess NGOs, I was sceptical and mentally preparing for more critical comments. Luckily, the researcher in me won over the potentially ranting aid blogger and I sent out some messages to a variety of organizations featured in the ranking as well as the editorial team asking for more details on process and methodology. I received open and positive feedback all around and one 20 page methodology paper, a couple of email exchanges and a 25 minute phone c onversation with one NGO later, a much more nuanced picture had emerged about the ranking, learning pr
Post a Comment
Read more 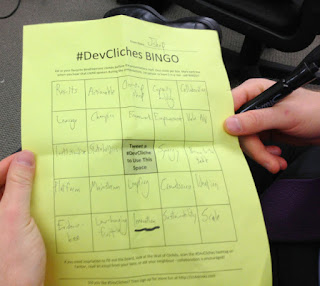 Hello all, One of the things I like about my weekly link review is that's it's always a bit unpredictable. So this week's list is much more eclectic and there isn't really a 'theme' , well, that's not entirely true I guess. There are some interesting links 'working in development', e.g. getting 'hands-on' experience or the power of internal organizational referrals. There are also some interesting links dealing with the changing nature of academic reputation building, including Academia.edu's story and a new software to assess you 'impact' differently. But there are also many more interesting stories. Do check out Durham University's 'Writing on Writing' archive featuring short contributions from established social scientists on the nature of, well, writing in academia; and in case you are still stuck in a meeting, why not try out the 'DevCliche' bingo...and just as I was wrapping up the review Ed Carr posted a
Post a Comment
Read more

January 24, 2013
Hello all, It's always n eat when the weekly link collection ends up with some kind of the me or thread guiding my collecting and commenting and hopefully your reading, too...I guess this week is all about some of the great ( new) ways a diverse range of women are contribut ing to what it means to be professionally involved in 'development' . Rosa lind Eyben contributes to the evidence and impact debate that is taking place at Duncan Smith's blog; Mary B . A nderson's new project on 'Time to Listen' is included, so is Al anna Shaikh's post on the current state and hopefully better future of aid coordi nation. Marianne 'Zen peacekeep er' Ellio tt talks about yoga, well-being and the power of narrati ves where as Janine di G iovanni ref lects on being a frontline war reporter. Last not least, Leila Janah shares some in sights of managing a successful social e nterprise-and why being ' the woman' on a conference panel may actually be a goo
Post a Comment
Read more 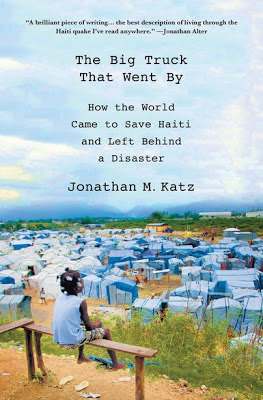 Jonathan Katz’ book The Big Truck That Went By . How The World Came to Save Haiti and Left Behind a Disaster has already received a lot of recognition and positive endorsement and I do agree that his book is an excellent expose of contemporary global humanitarian and development efforts and key systemic flaws . As a former AP correspondent he lived through the 2010 Haiti earthquake and followed closely the reconstruction efforts machinery that quickly set into motion for one of the world largest aid efforts. You may have seen the advertising banners on Palgrave’s website ( ‘ Where Did YOUR donation go? ’ ) which I find a bit misleading for the sake of marketing the book to a broader audience. But t his is not the author’s fault, of course, but the story does not really follow ‘your donation’ and it captures the complex nature of post-disaster aid better than simply ‘exposing the failure of foreign aid’ – which the book still manages well. To give my review a better focus, I w
Post a Comment
Read more
More posts