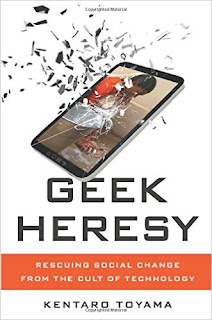 I first ‘met’ Kentaro Toyama when he was blogging as the ICT4D Jester.
So when he published his book ‘Geek Heresy – Rescuing Social Change from the Cult of Technology’ I was curious to learn more about his personal transition from Microsoft researcher to W.K. Kellogg Associate Professor of Community Information at the University of Michigan School of Information and, more importantly, the context of challenging the tech-centered logic that is driving a lot development initiatives, especially when teaching and learning are involved.

To get straight to the point: I believe that Toyama delivered one of the most interesting and intellectually astute contributions to the ICT4D debate in many years in an engaging format that effortlessly combines professional insights, relevant anecdotal evidence from ‘the field’ and a broader theoretical framework that demands serious discussions with the development industry.

No laptop left behind
In some ways, the first chapter is a actually one of my favorite parts of the book: It is a concise reminder of how ICT4D ‘innovation’ often works:

We filed a patent, convinced Microsoft to release a free software development kit, and imagined that schools around the world would benefit. We declared victory, and temporarily forgot about the lack of toilets, the silent parents, and the absent teachers (p.4).

Sure, nowadays some venture capitalist steps in to ‘disrupt’ the sector rather than Microsoft, an accompanying open data platform monitors the performance of teachers and an external research team is involved in a more structured way, but in the last ten years since Toyama first arrived in India technology-driven has been criticized, not least here on the blog.

Leaving Microsoft to change the world?
As I often write in my reviews, I am in a very fortunate position that reading books is part of my job. One of the big pluses of Toyama’s book is that it avoids some of the pitfalls of narrative writing; to put it bluntly I enjoyed the absence of some typical parts that often accompany biographical reflections:
There is no background chapter on how the author experienced poverty him-/herself, no single ‘aha’ moment along the line of ‘when I saw this girl carrying a bucket of water in rural (developing country) I knew I had to do something’ and no founder myth on how the author borrowed 10 dollars for gas from his only remaining friend to attend a tech conference.

Toyama always personalizes his narrative throughout the book, but he finds the right, humble tone and always seemed to be around empowered and empowering colleagues. In his professional world nobody needs to be ‘rescued’ by ‘us’ and our amazing technology.

The law of amplification
Toyama’s central argument is simple, big and very challenging to grasp with the conventional tools of development and ICT4D research and practice: Key to a successful, empowering, social change-driven engagement with technology lies our understanding of amplification: Technology and gadgets do not ‘flatten’ the playing field, but enable those with better skills and knowledge to do better and according to Toyama not just in the narrower context of education projects:

Digital technologies are just an extreme example of what could be called packaged intervention-any technology, idea, policy, or other easily replicable partial solution meant to address a social problem (p.57).

His argument culminates in a powerful statement at the end of chapter 6 how the ‘Silicon Valley discourse’ has gotten in the way of sustainable social change:

The quest for intrinsic growth

My hope in the rest of the book is to show how heart, mind, and will-not just in individuals, but in societies-are the essence of social change (…). I’ll use the term intrinsic growth to describe progress in intention, discernment, and self-control (p.133).

This is a big endeavor and in a very clever way Toyama resists the temptation to come up with his own ‘manifesto’ or a similar approach to ‘fix’ development or IT/ICT4D.
His holistic approach transcends narrow notions of our contemporary development discourse as he moves into holistic education and personal development. Ken Toyama is also affiliated to MIT’s Dalai Lama Center for Ethics and Transformative Values and his reflections move into a spiritual space that is intellectually very rewarding. His notion of mentorship that he outlines in the final chapter of the book is interesting food for thought for those who think about power relations in development, partnerships, relationships and the increasingly popular metaphor of ‘co-creation’ for example. In the end, he leaves the reader with quite a challenging task:

we should focus on those goals for which technology and technocracy are ill suited: serving poor communities, educating the less educated, reforming dysfunctional institutions, organizing marginalized groups, preparing for long-term crises, encouraging self-transcendence, and eliciting responsiveness from those with power (p.210).

Then again, technology does play a role in many of the areas he outlines, but I guess that overcoming the disconnect between ‘drones can save lives’ or similar ideas (or maybe even ideologies) and truly, humanistic social change will be one of the big issues for 21st century ‘development’ debates.

How radically can we (and want to) rethink ‘development’ in the 21st century?
Toyama is not a development expert in the more traditional meaning of the term and I wonder how other debates need to be tied into the amplification discussion: How have the ‘results agenda’, focus on ‘impact’ or the application of RCTs and natural scientific methodologies shaped our understanding of ICT4D? And what can we do about it?
Geek Heresy does not want to provide easy answers to those debates-it is certainly one of the most interesting books I have read in long time since it manages to be grounded in reality without drifting off into too much of an anecdotal space; at the same time it creates a big canvass without moving into a self-helpy space where we can all be better consumers if we follow a few simple steps and it tells us a lot about ‘development’ with very little reference to the development discourse we often default to of building more and better. Read the book not (just) because of its criticism of current ICT4D debates, but because of the challenging, yet rewarding, intellectual future it opens up of how ‘we’ can achieve sustainable social change:

Additional intrinsic growth would mean less material consumption and more involvement with self-transcendent ends. Other countries would likely follow.
Seeking our own growth also takes the edge off of paternalism. Humility is required in social causes, as privileged-world dogmas often cause damage. We should dispense with arrogant notions that we’ve reached some End of History.15 Today’s rich societies are, at best, adolescents with still a long way to go before they reach maturity. When everyone’s intrinsic growth is a common goal, relationships become closer to true partnerships (p.216)