November 30, 2010
I enjoyed reading the summary of David Eaves’ presentation on aidinfo. Especially the concluding remarks seem to be a good summary of why the discourse on open data seems to gain some momentum, they sound right and they are also right in many ways:

With a good set of examples, patterns and common practices, the use of data will become embedded in development practice. Better information will make aid more effective: data portals improve data literacy, an open culture promotes learning, and using information to add value in the aid sector will ensure data remains open and will promote the release of more [my emphasis].

But then I read ‘Story project aims to put people back at the heart of development’ and it confirmed some of the discomfort I have with the rising popularity of aid data:

Concern that an obsession with numbers is leading to development donors distancing themselves from those they seek to help has led to the creation of a new initiative which seeks to bring stories and story-telling back into the heart of development communication.
(...)
Andrea Cornwall points out that it is not that development does not need numbers. 'Counting the number of people living with AIDS, the number of women dead or maimed because they were denied safe abortions or the number of people unable to access safe water can make policy makers pay attention to issues they might otherwise not make a priority.'
But, she said: 'It is time to speak back to the folly and the arrogance of those who try to reduce the complexities of life to proxies and metrics, and create with their numbers the emperor's new clothes.

I already posted a short piece on my scepticism with ‘better numbers’ and I want to structure my short critique around four issues/themes that I think require a bit more attention and discussion:

1. This is not about conspiracy theories or a general bashing of large donor organisations. The history of development shows that if ‘everybody’ likes a term/concept/discourse it is probably too broad (see for example ‘participation’ or ‘good governance’), no longer an innovative concept or not challenging to the fundamentals of how development is ‘done’. I have a feeling that maybe all three elements may be true to some extent when everybody is starting to like aid transparency. I am not saying ‘do not publish data’, but I am still missing a critical debate on the ‘small print’, e.g. questions on what counts as ‘data’ and whether engaging with numbers is sufficient. Is there a danger of ‘data’ as the new ‘tyranny’, as two well-known books on the participation discourse have inquired?

2. Policy would be so much better and more ‘effective’ if we had all the/more information. Since the early days of public policy analysis (e.g. Aaron Wildavsky’s work) this seems to be one of the holy grails. But more aid data will not substitute the reality that many political decisions are not based on ‘facts’. Maybe a look into DFID’s budget will reveal some interesting, misguided spending, but I am pretty sure that 2 senior bureaucrats, 3 academics and 1 external advisor were against this project in the first place. It happened anyway, regardless of more, better and critical data. There was a political will to support this country, that government or this initiative and all the data will tell you is probably that political will and effective aid very often do not make good partners.

3. Related to introductory point on the power of stories, more aid data are not likely helping to challenge the ways big organisations are thinking about aid. Maybe it can ‘improve’ the managerial, substantialist approach to aid, but similar to, say, numerous UN reforms in the past it may only scratch at the surface rather than changing the membership of the Security Council. Many of the ways ‘development’ thinks, reports or learns need to be addressed and I think aid data can only have a limited effect on more fundamental flaws of the aid system.

4. Most of the aid data is collected/published ex-post. Interesting for researchers, but for many others they will be old data. Nothing can be changed, nobody is likely to be taken to account and as political processes go, they are difficult to forecast. Elections, changes in the bureaucracy, a new ‘white paper’ all can have an impact-and they are likely to produce more ‘better’ data or create new mistakes without learning from the old ones. How can data be used to change funding before it is spent? How can complex bureaucratic processes become more responsive if an outsider discovers a problem? And how much ‘real time’ influence is really desirable? Maybe people or experts should vote on how actual money is spent in development, but that sounds like a complex process that needs more experimentation.

To sum up, I am still all for publishing as much data as possible, but I also would like to see more critical voices that question some of the assumptions – even if it is just an exercise for open aid enthusiasts to make a better, stronger, more effective case for this important and valuable project. 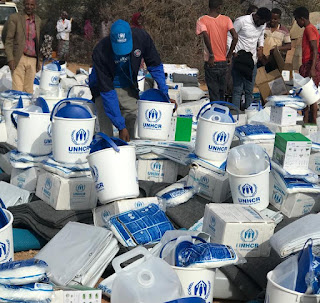 Hi all, After a little summer flu health break last week, Aidnography is almost back to the usual routines just as the new semester is about to start next week. From plastic waste in Ghana to urbanization in Nigeria, a lot of well-known #globaldev challenges (re)emerge this week, including adoptions from the periphery to the center, UN whistleblowing, exploitations of Jamaican migrant workers in Canada, or the persistence of the Rohingya crisis in Bangladesh...and I won't become a fan of Effective Altruism and Longtermism; plus, 5 years ago Madonna helped Malawi... My quotes of the week For Biritwum, littering was a result of poverty and lack of proper housing, not slovenly behavior. Ghana was changing, he went on, because of habits imported from Europe and the United States (...). “We are becoming more throwaway, more takeaway,” he said. “We are becoming more like you.” ( West Africa Is Drowning in Plastic. Who Is Responsible?) “If my minister asks me whether it is safe to spend
Read more