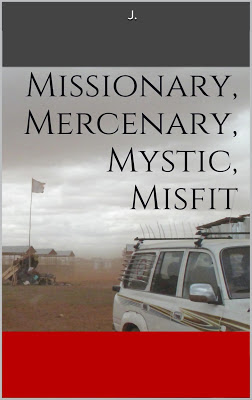 I approached J’s new book Missionary, Mercenary, Mystic, Misfit, the second humanitarian (romance) novel after Disastrous Passion (which I reviewed almost a year ago), with a bit of caution.

As much as the pace of the first novel fitted the immediate post-quake relief effort in Haiti which served the purpose of introducing novice aid worker Mary-Anne well, I was skeptical whether the second novel would try to trump the dynamics of high-paced relief effort and high-paced love affair with a French aid worker.

Luckily, J. decided to take a different approach which in my view benefits the novel and shows the evolution of Mary-Anne, of humanitarian aid complexities and him as a writer. In many ways, he seems to have captured the pulse of the ‘aid industry’ in a gentle, yet critical way which allows for deep insights into the realities of living the life of an aid worker in the context of Ethiopia/Somalia. Think less reality TV (‘The real aid workers of Dolo Ado’) and more two-part PBS documentary on contemporary humanitarian aid work dilemmas with a near-constant consumption of alcoholic beverages thrown in that would make Mad Men’s Don Draper proud...


Just understand that being an excellent humanitarian worker and having a bright future career-wise are not necessarily linked. Don’t assume that by doing the first, you’ll get the second automatically. And similarly, don’t assume if you manage to achieve the second, that you were successful at the first (pp.65-66).

In moments like this when Oxfam veteran Jonathon Langstrom shares his reflections with Mary-Anne, torn between increasing responsibility on the ground, a potential headquarter promotion and a long-distance relationship with Jean-Philippe, the book manages to unfold its full potential as unique ‘edutainment’ that goes beyond snarky blog posts or the inaccessibility of many academic articles.


The overall stats for Kobe Camp showed it was in that supremely unsexy space between “acute” or “emergency”, and “just really poor.” The nutrition stats basically said that people were undernourished but not in imminent danger of dying from starvation, making Kobe Camp therefore no longer eligible for most of the common relief donors and relief grant programs solely focused on “life-saving interventions”. At the same time, Kobe Camp was still a refugee camp and, by definition, therefore not a “development context” (p.87).

This is the reality for Mary-Anne and one that is mentally draining and emotionally difficult and goes beyond the latest op-ed on why aid ‘works’ or ‘doesn’t work’. And the fact that Jean-Philippe is on various consultancy missions somewhere in Africa and Jonathon may be more than just a ‘beer buddy’ in the evenings does not make life easier...

The career challenge for Mary-Anne is about whether she could still ‘help people’ from the distance of a DC HQ job and her confidant Jonathon shares his views on the impossibility of choosing the ‘right’ career:


It’s important for you to understand that pretty much the only space in the humanitarian industry where your job is really, truly, and completely about achieving quality standards [...] is at the project level. You move away from the project level, even based in here in “the field” in Dolo Ado as you are, and it becomes about resources. (p.98)

J. manages extremely well to describe many of the realities of how aid partnerships come into existence, how and why organizations team up for proposals (an organization needs to find one quickly to spend money and ideally get a matching grant from someone else) and how large donors make often ad-hoc decisions on whom to give the money to.

By following Mary-Anne as she literally goes to Washington, we are following donor money and politics, carefully manoeuvring between realistic developments and an entertaining story that culminates into a series of dramatic highlights. But in the end, it not just about money disappearing from one of the projects or reuniting with Jean-Philippe in Nairobi. In the end it is about managing an essentially ‘lose-lose’ scenario with almost impossible compromises:


“You need to understand that this industry—the aid industry—will take everything you have to offer, and it will give you nothing back. It will not necessarily treat you unfairly. But there will be no medallion on your grave. You will not get anything more than token recognition for the times when you work eighteen hour a days in the field while your HQ counterparts head for happy hour at 4:00 PM. You will, or may be, passed over for promotions or jobs that you’ve rightfully ‘earned’ in favor of colleagues who are less qualified than you, or who have done less for the organization than you, or who have pulled fewer hardship deployments or all-nighters, or had giardia, or been shot at by armed militants fewer times, or brought in fewer grant dollars than you. It is important for you to understand that the aid industry is just like any other. Which is to say that it is cold, calculated, political.”

I do not want to be too rational about what is essentially a grounded, well-written novel that demands the right amount of attention of the reader without losing completely sight of the entertainment. It can be serious at times, for example when we learn about Jonathon’s strained marriage or are forced to focus on the plight of one family in the refugee camp. But most of the book is subtle and gentle like Jonathon and Mary-Anne’s romantic encounter in the backseat of the white Landcruiser during a sandstorm.

In my review's conclusion for Disastraous Passion I recommended the book as a good read ‘for the hardened veterans of the aid industry or the chronic disbelievers in academia [as] a great way to combine pleasure and work’.

As Mary-Anne manages to live through the four ‘humanitarian states of being’ (Missionary, Mercenary, Mystic and Misfit) and evolves professionally and personally I was once again glad that I joined the ride in the backseat of the humanitarian-reflection-bandwagon!

Add the book to your summer reading lists!

Full disclosure: J. kindly asked me to be one of the blogging ‘beta readers’ and provided me with a free copy of the ebook.