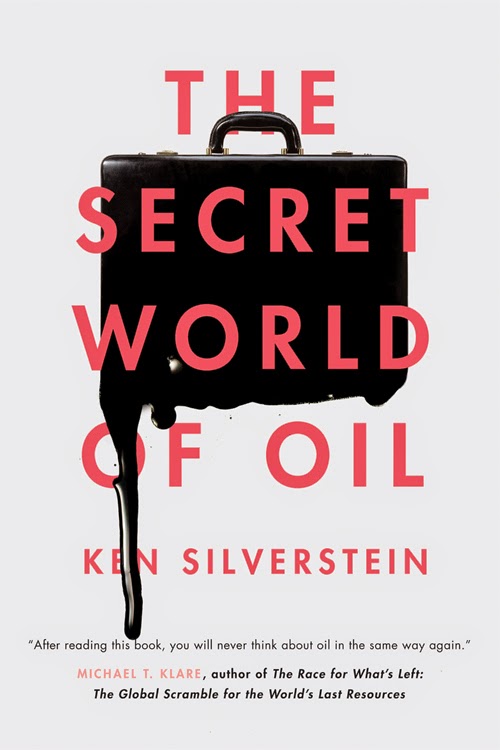 Ken Silverstein’s new book The Secret World of Oil is an interesting and engaging reading experience and a very good fit for a review on Aidnography.
By bringing some of the often hidden dynamics of the oil world to the front stage his book is located between journalism and engaged ethnography while touching on an issue with clear, yet often unaddressed, consequences for the development industry:

Virtually every stage in oil's production process, from discovery to consumption, is greased by secret connections, corruption, and violence, even if little of that is visible to the public. The energy industry, to cite just one measure, violates the US Foreign Corrupt Practices Act more often than any other economic sector, even weapons. This book sets out to tell the story of this largely hidden world.

The Fixers
The first chapter The Fixers: Ely Calil takes the reader right into the ‘shadows’ to employ Carolyn Nordstrom’s ethnographic concept of looking for the grey areas where states, individuals and the global economy meet in mostly unaccountable ways for 21st century profiteering. Silverstein goes to some length to introduce the ‘friends that help the energy industry to thrive and prosper’ (p.14) with transactions that mostly involve ‘inherently politicized and centralized’ (p.26) state apparati that have little interest in winning donor awards for transparency and good governance. Unsurprisingly, these transactions often surpass development-funding dimensions and are tightly interwoven with tax shelters and shadow banking. Silverstein never loses track of the bigger picture and the economic enablers behind the trade; he concludes that the ‘influence of the traditional middlemen is waning, but the practices around oil deals have not become more accountable’ (p.42)-an important warning that multi-national, multi-billion dollar industries do not easily abide by rules and increased ‘corporate responsibility’ and that this is truer than ever in most parts of the extractive industry (as Chapter 3 on the trading firm Glencore highlights in detail).

The Dictators
The next chapter The Dictators: Teodorin Obiang provides scary insights into some of the world’s most ruthless oil regimes in Equatorial Guinea or Libya under Gaddafi. Reading about dictatorial excess and how a small elite was not only interwoven in the global jet-set, but was allowed to run most corrupt regimes with the backing of the international political and corporate community because of their oil wealth is a stark reminder of how powerful this liquid is in international politics.
In the end, these individuals and their extended families run out of luck and fell out with their protectors, but it is a reminder that any ‘revolution’ or ‘popular uprising’ requires careful and critical analysis that includes a further look at the ‘secret world’ of oil and other natural resources.

The Traders
More of these uncomfortable questions for peace research, policy advice or IR are addressed in the next chapter The Traders: Glencore, when the Swiss-based multi-billion dollar conglomerate is introduced as a major force on the oil and commodities market: Some of their most profitable operations, e.g. in Libya, Iraq, Syria, Ukraine or DRC, are based in the least stable countries and Silverstein creates a nuanced and careful argument how Glencore benefits from operating in the shadows and in volatile situations, suggesting that there is a political economy that benefits (more) from instability than it would be from peace.
Even if traders assure Silverstein that they ‘can’t drive prices (and) merely amplify trends’ (p.86) it is worth noting that these trends are created by a small group in the infamous shadows and are unlikely to benefit the majority of ‘normal’ people.
In the end there is a powerful ‘don’t ask-don’t tell’ policy in place when it comes to getting oil deals done, as one dealer based in Switzerland explains:


You have to pay your parking and your taxes and respect your neighbors, but if you want to cut a deal with a bandit it’s OK. (p.90)

Gatekeepers & Flacks
The following two chapters on The Gatekeepers: Bretton Sciaroni and The Flacks: Tony Blair are not the best pieces to strengthen the narrative of this expose.
The case of Cambodia and a former American government lobbyist and Tony Blair’s sharing of his general and limited wisdom for a very high speaking fee are certainly interesting, but they lack a thorough link to the ‘secret world’ that the previous chapters explored so well. Sure, Tony Blair does not seem to hesitate to engage in speaking engagements in oil-rich and governance-poor states such as Kuwait, Iraq or Kazakhstan, but he is not an ‘oil man’ per se. He does, however, contribute to an enabling environment where a small elite buys and sells access to back channels etc.-which ultimately undermines transparent democratic processes-but that should not come as a surprise if you are actually buying book from Verso and read critical reflections on global leadership circles.

The Lobbyists
I really enjoyed the last chapter on The Lobbyists: Louisiana. Silverstein manages to bring the argument of bad oil-driven governance home to the United States. The ‘corruption, the glaring social inequalities, the little spending on social programs’ (p.155) and the absence of a ‘trickle down’ effect of the benefits of decades of oil exploration are a powerful reminder how these dynamics are not just limited to the Third World, but seem to be inherent to the current oil economy everywhere.

A short chapter on The Hustler: Neil Bush wraps up the book: Even as he has become less influential and powerful (or maybe just run out of luck?), the industry looks after him and he is still operating in one shadow or another…

The limits of frontline development in a world of back channel dealings
All in all, the book was a very satisfying read on my transatlantic flight: Part super-long, well-researched journalistic essay, part ethnography of the shadows, the ‘secret world of oil’ really comes to life.
The irresistible mix of shady individuals and the broader enabling environment of corrupt states, tax heavens and many shades of grey in dealing with this powerful commodity is an important reminder that oil, conflict and undemocratic interests often go hand in hand.
I wish Silverstein had added a final chapter that tied some of the main aspects together for a more complete synthesis of the puzzle with piece from France, Switzerland, the U.S. and many other places where oil usually enriches a small elite.
As some of the players find carbon emission trading more lucrative than actual oil deals nowadays makes the book yet another sobering read about the limits of well-intended development efforts in the broader sense. Good governance, codes of conduct, CSR and peacebuilding are unlikely to have an impact on extremely profitable extractive industries, but critical journalism and research can at least expose some of the practices in the shadows and hopefully lessen the negative impact of oil and other commodities trade for future generations.

B(u)y the way: Verso offers a great bundle deal consisting of the hardcover book as well as a DRM-free ebook for 50% off at the moment which I think is a great way to support an independent publisher!