The BBC-Myth of a Public Service (book review) 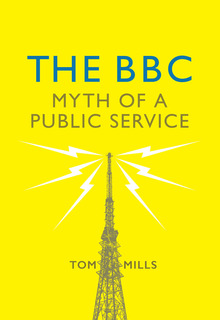 Tom Mills’ book The BBC-Myth of a Public Service is a book for which the slightly over-used phrase of a ‘timely contribution’ is actually very fitting.

His interesting historical review of one of the world’s most renowned news media enterprises deserves attention, especially because his detailed analysis bridges the gap between ideologies and political leanings.
Tom Mills’ longer-term perspective also enables him to look at key developments that took place over time and that seem to have culminated in all-too-easy catch-phrases about ‘fake news’, ‘alternative facts’ or the ‘post-factual media age’.

Through his careful analysis of historical documents and previous studies on the history of the BBC during particular eras or political events, Mills advances his main argument. It may no come as a staggering surprise, but it is still a powerful base from which to explore the intricate relationship between media and society:


the incidents illustrate the close relations between the BBC hierarchy and the political elite. This has shaped editorial policies and practices, making the BBC much more amenable to elites than democratic and egalitarian movements. BBC journalists may have, to differing degrees, advanced most substantive notions of independence, and even absorbed elements of oppositional politics into their professional ideology. But they remain answerable to their superiors who, like many of them, are often drawn from the same social strata as politicians and state officials and are, moreover, responsible for maintaining good relations with senior politicians and other elites who ultimately determine the BBC’s future (p.34).

As I said, this is hardly a radical analysis, but nonetheless an important point for departure to think about communication and/for development, the area my teaching and research takes place.
I wrote about large development organizations before and at points Mills’ book reminded me of Adam Fifield’s biography of UNICEF’s Jim Grant. Both large organizational ‘tankers’ are affected by their leadership and the broader socio-political climate and as they rely on outside support and legitimacy they can never be fully ‘independent’, but they are also not simply stooges of ‘the system’.

The neoliberal game-changer
As Mills moves closer to the 1970s and 1980s (chapter 4 onward) I found the book a particularly enjoyable read that manages throughout the storytelling to convey a vivid picture of what neoliberal ideology, privatization and new forms of media ownership and broadcasting really meant for the BBC.


In the late 1970s a very powerful narrative gained traction:
The claim that the BBC was biased to the left thus became part of a broader mobilizing narrative, adopted by the conservative movement, which claimed that a privileged, metropolitan elite was imposing its liberal values on the public (p.110).

While the conservative view may not be a completely untrue assessment, especially regarding the concentration of power in the metropolitan (read: London) elite, it was a powerful discourse that helped to distract attention from both traditional elites and, more importantly, the rise of ‘the City’ with its ‘financial services’, consultancies and media owners ready to cash in on privatizing public services.


The BBC, meanwhile, like the public, and for a time parliamentary opinion, remained broadly tied to the social-democratic consensus, putting it at odds with the cultural shift in elite opinion that was taking place in the business sector (p.119).

Not surprisingly, the story of the BBC becomes the story of ‘Britain’ as Marylin Strathern’s ‘audit culture’ and David Graeber’s ‘bullshit jobs’ transform television news. At this point, Mills’ story has evolved into a fascinating case study of what ‘neolibralism’ really meant in practive and how it transformed public organizations.


The realization of this ambitious scheme (exposing the BBC to cost-based competition from private companies) required the construction of a vast new bureaucratic machinery. Producer Choice ‘Implementation Groups’ were established (…) each – with the exception of the Finance Group – staffed with a private consultant. New budgeting and planning systems were developed, along with new ‘commercial ground rules’ for contractual bidding and pricing processes. The value of everything within the corporation (…) had to be quantified, since in order for the system to work on ‘a fully costed basis’ it was necessary not just to develop a price system for internal trading, but (…) to ‘charge both production resource departments and programme makers for their overheads, accommodation and capital’ (p.160).

On the one hand these developments may only cause helpless shoulder shrugging since such language and practices are nowadays ‘everywhere’, but on the other hand it is important to keep in mind that these changes have had real consequences.


was not a result of public interest in business reporting, but rather the outcome of a long process of institutional change that the BBC underwent from the Thatcher period onwards; and in no small part, this was the result of explicitly pro-business initiatives by the neoliberal leadership of the BBC (p.202).

In the end I am left wondering how this analysis relates to the aid industry and understanding the World Bank, UN agencies or bilateral ministries that all underwent a ‘neoliberal turn’.

Conclusion: Transforming news media?
Connecting to his initial analysis, Mills does not offer a comprehensive or radical vision for the future. It would probably not entirely fair to demand change from one institution that is still dependent on the political economy that supports it.


Such successes (the popularity of the website and iPlayer) point to the sort of role a strong, independent, publicly funded BBC might play in a post-broadcasting future, which presents opportunities for much more authentically democratic arrangements than were possible when radical media reform was last on the agenda in the 1970s (p.217).

I am not sure that I share this slightly more optimistic vision and the current state of development journalism that I have been highlighting here on the blog makes me more skeptical than ever. But The BBC is an important reminder that media do not exist ‘out there’, but are firmly embedded in society:


The changes mirrored those of the wider society. Power became more centralised, professional decisions making became more marketised and working conditions were made more precarious. Meanwhile, as most found their freedom curtailed by neoliberal bureaucracy, a largely Oxbridge-educated elite retained its decision-making powers and salaries of those at the top sky-rocketed (p.213).

My review may not be able to give justice to Tom Mills’ very detailed and readable account of how the BBC may have never fully reached its democratic potential.
But for media, communication and journalism students and researchers it provides ample food for thought how the past of public broadcasting relates to our messy contemporary times.
And for the (communication for) development audience it offers valuable insights into institutional transformation under the neoliberal condition and the chances and limitations of communicating social change.