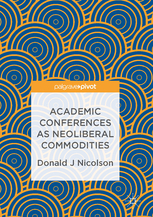 Donald J. Nicolson’s Academic Conferences as Neoliberal Commodities is a short new book that addresses one of the favorite academic products researchers love to hate.
Nicolson’s book offers a fresh and concise overview over the topic based on his own experiences primarily in the field of health science and additional interviews with a sample of academics from different disciplines. His “exploratory examination” (p.8) is structured along a fictitious conference proceedings table of content and in many ways he does take us on a journey to explore gatherings of academics in the neoliberal age.

He starts with a short historical exploration into conferences and, at least for me, with a reminder that there really was a time when they fulfilled the expectation of “intellectual communication (and) to enable people to present and discuss findings from research” (p.5).

Nicolson introduces his neoliberal framework early on, but for me it remains somewhat abstract throughout the book, but I reserve a more substantial critique for the second part of my review. “I see the dangers of academics being exploited as commodities and academia shifting from its intellectual traditions” (p.18), he writes, but to me there is a risk of a circular argument: If higher education is or becomes commoditized, isn’t by definition any academic activity then “neoliberal’? And why then waste all this time and money on inefficient conferences-shouldn’t the line manager ask you to write research proposals instead or attend a “student experience improvement workshop”?
Particularly after the first part of the book which consists of detailed case studies of conference attendance, I remain puzzled as to why “neoliberalism” explains conferences-especially mega-conferences of various ‘studies associations’.

Nicolson offers one explanation at the very end of the first part of the book:


It might be said in general that conferences are places where buyers come to inspect a product, which might be knowledge, methodological skills or research in progress. (…) Conferences might no longer be a place to make a controversial or political statement, even by chance, in a neoliberal age, where corporate identity and the commodities derived from research are all important (p.35).


Still, I am not entirely satisfied…

What is a “neoliberal commodity”?
The second part and half of the book adds additional aspects to the conference attendance discourse, but I had wished that Nicolson would have gone a bit deeper into key aspects. He points out important aspects of the academic conference industry-but some of his observations seem a bit tame: “An attractive venue may be an added incentive for attending a conference” (p.42), he remarks, or reducing the travel aspect to carbon footprints and a burdensome border/visa regime that emerged just as the book was ready for publication. The civility at conferences that one informant identifies as a “keystone of academic discourse” (p.45) almost seems to hold his own writing back at this point. And his rather positive take on poster presentations and an overall positive notion of “academic socialization” may have to do with different disciplinary perceptions of the value of these commodities. I never understood why networking cannot be organized through a smaller workshop or simply visiting nearby colleagues at work.

In his conclusion (“Closing keynote”) he misses important opportunities to challenge the “neoliberal” framework even further: If “time and money are barriers to people being able to travel to and attend conferences” then why not present more detailed data: How much time and money is spent on conference participation? If we randomly assume every participant of a 3000 person conference only spends one work day on the conference, isn’t the loss of 3000 work days a mind-boggling waste of (mostly public) money!?

“The impact is often at the personal level” (p.61) seems to me a little bit of cop-out.

In the end I fully agree with Nicolson that “the lack of research examining the impact of academic conferences” (p.64) is surprising and that ultimately the “book represents a beginning of a conversation; that is, a possible new focus for research” (p.66).

Ritualization, localization, mediatization-how to take critical engagement with academic conferences further
Strictly speaking, my book review ends here. But academic conferences have both been an aspect of my research and my blogging and I want to take this opportunity to add a few aspects from my ethnographic and media and communication background.

In my research on peacebuilding conferences, academic or policy-related, in Nepal and Germany I am introducing research on performance studies and ritual economy.
I think they add nuances to a broad concept such as “neoliberal”, taking the choreography of events much more into consideration and the rituals of how knowledge is performed rather than simply “sold”. The performative aspect also links to the physical environment: the global chain hotels with their nondescript PowerPoint presentation rooms without daylight create an uncreative environment to seemingly “think out of the box” of daily routines. With reference to Marc Augé, such “non-places” can fulfill various capitalistic expectations, for example creating places for consumption and not for reflections, criticism, let alone political activism.
Maybe neoliberal managers are quite happy to send academics to conferences since they know that the revolution will not start in a Hilton Hotel meeting room without Internet access?!

I want to mention three more aspects, namely true cost, localization and the role of technology. I still think that a proper analysis of true cost, both direct monetary cost and indirect cost in time is important. The regular annual gathering of the something-or-other association costs hundreds of thousands of dollars-for, to put it bluntly, an all male panel where someone shares published research from their recently concluded project.

Conference travel is not just about tourism. It is also not just about food, culture and a comparative study of craft beers: Many social science conferences struggle with the disjuncture of the globalized conference venue and real local developments, activism and politics. Plus, there are tons of issues around inequality, global solidarity and the paradoxes of neoliberalism: Adjunct and sessional faculty may be unable to afford conference participation-but what would they really gain from the depoliticized gatherings waiting in the coffee queue?

Technology is an aspect that has popped up on this blog more than once. The unwillingness of many associations to embrace the digital age and increase diversity is a core problem of most conferences: They want the income from participant fees, they want as many people as possible on site to create fake exclusivity by switching off the wireless network.
When pointing fingers at university managers or research funders in the neoliberal age we should not forget the role of associations that fuel unsustainable and uncreative gatherings.

If Donald Nicolson’s book can achieve one thing, then hopefully more discussions on the purpose of academic conferences across disciplines, privileges and inequalities!

Hi all, I addition to #globaldev news from Ukraine, Oxfam, Japan & Colombia there are a few really great new papers on 'digital famine', the future of development studies & labor organisation in South Africa that are worth bookmarking for your summer reading list! My quote of the week Despite raising significant sums of money in the first days and weeks of the crisis, international organisations could not provide rapid infusions of resources to strengthen and expand the existing local response efforts while they ramped up their own programming. Instead, three months later, most of the money was still unused, sitting with international organisations that are constrained from funding by compliance requirements that are too heavy and time-consuming for small volunteer groups to meet.  (Enabling the local response: Emerging humanitarian priorities in Ukraine March–May 2022) Development news Enabling the local response: Emerging humanitarian priorities in Ukraine March–May 2
Read more

As part of our application process for our MA in Communication for Development program we encourage applicants to submit a short application letter together with all the other application documents since 2016. Applications are formally reviewed by Sweden’s University Admission authority and our teaching team only reads and grades the short letters for additional points in the application score. We ask applicants to answer two short questions (about 500 words each) which we call “description of experiences” and “letter of intent” so applicants can write a bit more about their background and why they decided to apply to our program. We receive between 200-300 letters each year and even though we are a team of 6-7 teachers and I have not read each and every letter a few patterns have emerged as to what makes a good, solid letter and what some of the pitfalls are that are best to avoid or address directly. There is probably a bigger lesson to learn here as I think some of the issues not j
Read more