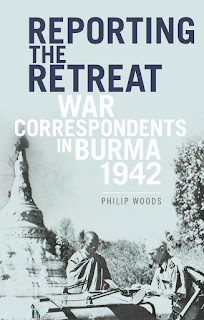 To be honest, I am not much of a military history person. I am also not exactly a WWII person either when it comes to readings at the intersection of work and leisure.
But Philip Woods’ Reporting the Retreat-War Correspondents in Burma intrigued me for its sub-title and I really enjoyed the reflections it sparked vis-à-vis today’s challenges of war reporting and the complexities of truth in media more generally.

Philip Woods’ book about ‘the six-month, one thousand-mile retreat of the British and Chinese armies from Burma in the first half of 1942’ (p.1) is a very well researched historical case study of journalism, news media and the work of foreign correspondents. The book looks at a group of twenty-six correspondents who reported from Burma for newspapers and weekly newsreel broadcasts and, equally important, about half of the group wrote memoirs shortly after their assignment in South Asia.
The discrepancies between their daily work, always impeded by military censorship, and their frank book-length accounts are a vivid reminder that there never were ‘good old days’ when it comes to war reporting and that many of today’s challenges have remained through time, new (digital) media and many different war theaters.

Fake news, propaganda & for-profit news organizations
One of the things I found quite astonishing was the extent of censorship and how most of the journalists followed the directive to support the ‘war effort’ through their reporting: ‘Journalists had to present their dispatches to three authorities’ (p.57) and the chief civil censor once told journalist Leland Stowe:


I always ask myself if my dear devoted daughter in England would be alarmed by this (reporting). If she’d be alarmed, however true, it shouldn’t be reported (p.59).


So while Eve Curie, the only female reporter, shared a frank account in her book Journey Among Warriors published in 1943, ‘her newspaper reports displayed none of that gloomy realism’ depicted in her book (p.61). In the end, she ‘told a partial truth about the air war over Rangoon but it covered a greater deception about the state of war in the rest of Burma’ (p.62).
These are exactly the issues that lead to many of the debates we have today about biased journalism, partial truths and the spread of alleged or real ‘fake news’, often blamed on digital developments.


In practice, however, newsreel self-censored because they understood that their role within the cinema programe was to avoid alienating audiences and support the main film. Newsreel editors also realized the power of government to control access to locations and to film stock, and anyway naturally saw themselves as contributing to the patriotic war effort (p.84-85).


So both commercial and ideological leanings of news program producers played an important part in framing news, sometimes being very close to ‘fake news’ by re-enacting battle scenes (p.89).

Emotional toll of reporting & the birth of Magnum photography
In addition to newspaper and newsreel journalism, photo-journalism was the third important pillar of journalistic engagement. This was an era when Life magazine had a circulation of more than 3.25 million around the globe.
This is the time of George Rodger who saw himself as a ‘war photographer and no journalist’ (p.78) and who also wrote a memoir of his time in Burma. After his assignment ended in Asia he returned to Europe at the end of the war and was one of the photographers who photographed the victims of the Bergen-Belsen concentration camp. ‘His long experience of war had left him scarred and it is nor surprising that he did not continue as war photographer’ and became a founding member of the Magnum Photos cooperative in 1947 (p.79).

How depressing or encouraging is the long historical view?
Looking back to journalistic practice and professionalism 75 years ago offers some really interesting insights into today’s discourses around war reporting. What Woods describes as ‘inevitable preference for stories of European evacuees’ (p.126) rings very true with today’s discussions around the ‘value’ of Northern victims and ‘heroes’ in journalism or development communication.
And Fay Anderson’s observation that


essentially reporters were imagined as an archetypal cliché-resilient, hard-drinking, hedonistic, churlish, and cynical. Let us call it the Hemingway syndrome-the celebrated machismo (p.140)


seems appropriate to keep in mind in contemporary debates about aid worker well-being and expat lifestyles. And there was certainly no support system in place when reporters like so many others returned from the battlefields of WWII and were left alone in coping with their trauma.

Woods’ provides a measured conclusion, pointing out that war reporters regularly helped ‘wounded civilians or engendered refugees’ (p.146). They ‘embellished’ stories, but also wrote the proverbial ‘first draft of history’ (p.146) through their dispatches from the front lines.


Censorship set firm limits on what they could report and the pressures of the media market meant that positive, exciting and timely tales of military actions were the stories that editors, the military, politicians and the general public wanted from them, and the temptation was always there to take shortcuts to provide them (p.146).


I think it is important that Reporting the Retreat ends on a note that neither romanticizes nor dismisses the journalists’ engagement and hints at important structural challenges of how media and news have always worked. It is quite remarkable that war reporting and journalism from foreign places still evokes similar debates than it has done throughout the last eight decades.

Woods presents a really interesting case study by analyzing a broad range of material that deserve more attention from development or media scholars as well: Notebooks, diaries and memoirs together with media outputs help us to better understand the limitations and circumstances of how media discourses and public perceptions are shaped.

At the end of the day the book is also an important reminder that things are not necessarily getting ‘better’ or ‘worse’ just because of ‘the Internet’-understanding the truths behind war and peace has always been difficult and the genre of war reporting deserves particularly nuanced and critical interpretation.