'Rapey men here are the same as rapey men there'
Let's be very clear once again: Don't send unwanted or second-hand items to the continent of Africa!
This happens nearly every time after a natural disaster and the snarky posts about a container full of high-heels on Vanuatu are getting tiring as well.
This conversation on the Facebook page is very indicative of the initial enthusiasm and the increasing amount of critical comments that women who self-identify as African are sharing: 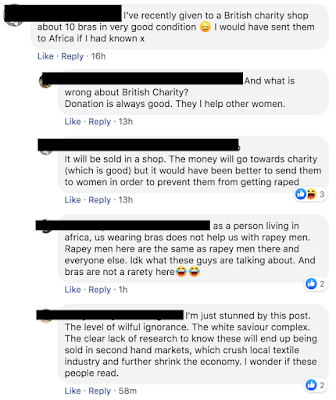 But there is a particular twist in this case: The unsubstantiated claim that the bras will empower women and prevent rape. This is nonsense. Go to the Smalls for All website and you will find zero (0) evidence for this claim.
(Since the post went live, a helpful reader pointed out that the link between bras, underwear & rape apparently does not originate from Smalls for All)


Unfortunately, there’s some misinfo circulating on social media – while we know underwear helps in many ways, we would never claim it would prevent rape. For more info, please see https://t.co/t8tNDuQwkG. Hope that helps and thanks so much for your support. Fiona.
— SmallsforAll (@SmallsforAll) June 20, 2019


Like many claims that sound gut-feelingly right, it will most likely not stand the test of research. I understand the good intentions of the women who will be sending their bras, but I am also expecting a minimal amount of effort to question claims, do some Internet research and/or ask someone before sending off stuff.
(According to my research the link between Smalls for All and rape prevention most likely stems from this 2016 article How donating underwear can help stop women getting attacked in Africa:


In Africa, some women are living in such poor conditions that they only have access to a single pair of knickers, or sometimes none at all.
Not only is this obviously unhygienic, but if women own underwear, they are considered more wealthy and likely to be ‘cared for’, which means they are likely to have a male relative in their life. In turn, this means they are perceived as ‘not alone’, and thus are seen as less vulnerable, and are less likely to be attacked or raped.
Smalls for all is a great charity which has been set up by Maria Macnamara, who after visiting and assisting vulnerable people in Africa, wanted to make a lasting difference to their lives.)

One thing that strikes me right away is that Smalls for All seems to be run entirely run by a, shall we say: quite homogeneous group of volunteers.

There is a short annual report on their website which is also quite interesting: About a quarter of the expenses in 2017 were spent on a 'Strategy Consultancy' (a whopping 18,000 GBP!) and more than 10% were spent on 'Educational Fees' for child sponsorship activities (another problematic area...); Smalls for All also made more than 7,000 GBP from 'Recycling' which I would assume means selling donated bras rather than sending them to 'Africa'.
Anyway, from what I can see publicly, I would approach the organization with caution and definitely not send them more bras...
Or, even better, go with the advice of another female commentator from Africa: 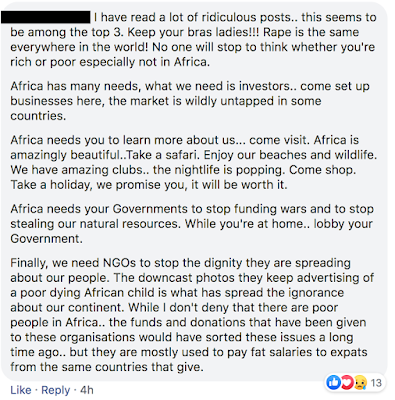 Here's another incredible #GiveAndMakeup drop off from our amazing customers. Just yesterday, we donated over 100 parcels to @RefugeCharity - thank you for helping us to make this happen! ❤️@CarolineHirons pic.twitter.com/ZNsQcLbZ9o
— Escentual (@escentual) May 18, 2019

This is a UK charity, but with my #globaldev experience I wonder whether sending 100s of parcels of unused make-up is the best way to support shelters. The story behind Give and Make Up is also not evidence-based:


Give and Makeup was borne out of an idea for a blog post.
I was going to write a post about essentials…that led to an idea about what your absolute necessities would be…that led to an idea about ‘what if you had NOTHING’…and that led me to this page on the Refuge website.
(...)
My eyes locked on to ‘Medicines and Toiletries’ and I thought of the amount of product I had sitting in my cupboard and felt ashamed. I scrapped the blog post and Give and Makeup started that evening.

I have not found much further evidence on the subject, because I wonder whether cash and/or vouchers would be an alternative so women/families can choose the products they need rather than relying on donations.

Update 11 July: A conversation with Give and Makeup founder Caroline Hirons
I had a long discussion on Twitter this morning with Caroline Hirons who started the Give and Makeup project.
It turns out that she is not very happy with the viral image of the two parcels that links her project to Smalls for All. In fact, her project has received quite a few unsolicited packages with bras already:

That picture gave us a lot of problems. We had to close the London address because we were being sent old bras. Just bras...

(...) No-one is trying to be a ‘white saviour’. And that viral picture was a pain in my arse to be frank. (...) And unfortunately that picture meant that a manageable situation had to temporarily close, because it diverted people away from looking after the women/families.

Hi. I founded Give and Makeup. Easily traceable. You don’t so much ‘name and shame’ so much as underhandedly tweet about it and blog about it without asking me directly. I’m not sure what part of GAMU isn’t ‘fact-based’ for you, but I’ll continue to take my lead from ...
— Caroline Hirons (@CarolineHirons) July 10, 2019

In conclusion: Doing in-kind donations well requires a lot of effort-and they should definitely not be sent to 'Africa'!
But just to go back to the beginning: Do not send stuff to charities that are planning to distribute it in 'Africa' (or other parts of the world that are far away from Europe...). Do some research.
In 2019, good intentions are definitely not enough-so be critical with charitable organizations. Cash works well in many crisis situations!