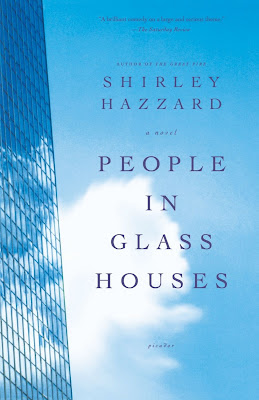 The 2020 UN General Assembly has just kicked off, marking a key highlight of the UN@75 year of celebration.
This is the perfect time to share my review of Shirley Hazzard’s People in Glass Houses, the best book about the United Nations I have ever read.

It started with a simple Tweet by writer Petina Gappah and over the summer I read Hazzard’s book based on her essays published in the New Yorker between 1964 and 1967.
Yes, you read that right: Hazzard’s book, more a collection of loosely connected short stories than ‘a novel’ as the subtitle claims, is more than 50 years old.
But what makes People in Glass Houses such a stellar literary contribution is that the poignant observations she shares through her stories are all but historical.
Her observations on the human condition of bureaucratic ordering are timeless. These profound insights that the UN is unchangeable, that it is not a lack of money or the wrong state being in charge of a committee and that the promotion of a bright middle-aged person will not lead to change are sometimes painful to read because they capture the essence of large bureaucracy that we have been told could be overcome with better IT systems, more training, visits to ‘the field’ and a new set of reforms.

This week I am adding to a new short story collection, to be published one day. It’s called INTERNATIONAL PEOPLE, inspired by this under appreciated collection by the brilliant Shirley Hazzard. Like hers, my stories are about the curious bubble of the international civil service. pic.twitter.com/bYFN2j24XK

Mr Bekkus frequently misused the world ‘hopefully’. He also made a point of saying ‘locate’ instead of ‘find’, ‘utilize’ instead of ‘use’, and never lost an opportunity to indicate or communicate; and would slip in a ‘basically’ when he felt unsure of his ground (p.9).

We are literally on the first page of the book and I can see nodding heads in front of computer screens and phones, because you have also met Mr Bekkus…lots of them…
In the first chapter Nothing in Excess we also meet Olaf Jaspersen:

Hazzard is a non-participant observer of the routines inside the UN’s Secretariat in New York and in that role she is never mean or moves into the role of an investigative journalist who uncovers important secrets from within the organization; she is listening to stories, talks to staff in the cafeteria and often just holds up a mirror so we can see ourselves in the organizational rituals, little cruelties and seemingly important routines that come with bureaucratizing political conditions.

The Meeting
What is fascinating about chapter three, The Meeting, is that it reminds us about a time when meetings were still something…new.

A forester and agricultural conservationist, Flinders (…) had never attended meetings until he got involved with the Organization. His profession had kept him out of offices (p.43).

But sure enough, Flinders ends up in exactly the same room where you were sitting at your last meeting in New York:

A secretary was distributing pads of white paper and stunted yellow pencils. The room was low-ceilinged, without windows, and carpeted in yellowish-green. At the end of it stood a small movie-screen and at the other a projector. At Flinders’s back, a bookcase contained a 1952 Who’s Who, and a great number of Organization documents (p.47).

Ok, the Who’s Who has been replaced with a 2005 MDG progress report, but otherwise…

Cheerfully he pieced together the scissored paragraphs (‘Two experts in metallurgy served in Tanzania during the year under review…’ ‘Four awards were made for the study of sanitary engineering abroad…’ ‘A fruit factory was erected in Kashmir…’). Swoboda was surprised to see how the very items that had been subject of so much anxiety and dispute throughout the year appeared, when reported, to be part of a grand and faultless design to which no disharmony could ever conceivably have attached (p.81).

More than 50 years later I tweet about the latest 386-page World Bank report on corruption...

But what about the Story of Miss Sadie Graine where she finally takes up a post ‘in the field’? Surely, this is where the real work takes place, not in the meeting rooms in headquarters?
But Sadie Graine meets Achilles Pylos, the Resident Coordinator in contemporary parlance:

Progress was a draught that must be drained to the last bitter drop. (…) to the ultimate consequence of technical change, change about which, indeed, the word ‘impact’ was frequently used. More thought-but by whom? Not by Pylos. Pylos was intent on staying on top of things, not getting to the bottom of them (p.103).

Hazzard is never cruel to her characters-none of them really deserves rour scorn or pity because they are human and mostly humane as well; they are doing a job that has often been labeled a calling and that has undergone an administrative framework and many reforms to make an organization work that is unique as it is an indication of our common failure to address deep-rooted problems whose solutions often lie outside the remit of the UN.

Miss Shamsee was like a resort town in bad weather: some spark, some animation, some synthesizing glow was missing. She had been too long with the Organization (p.72).

Nobody should be first to caste a stone...
People in Glass Houses is such a timely reminder that people who live in glass houses should not throw stones. Neither can Organization staff afford to throw stones of being superior beings working for the ‘greater good’ out of their offices overlooking the East River, nor can we caste stones on ‘those bureaucrats’ as we venture into our own offices, complain about our own growing bureaucratic requirements and talk in the break room about Stephen being unfairly promoted or the local shopping opportunities during our next trip abroad.

I am so glad that I discovered Shirley Hazzard’s book that sits uncomfortably between the most accurate reportage from inside the UN and a vivid fictionalized satire of a bureaucratic organization that we claim is overblown and yet so familiar whenever we step into the arena of global development and politics.

Imagine if I told you a story about a high school drop-out without any formal credentials who moved into a career with more humanitarian front line work and foreign policy impact than entire NGOs have-chances are that you think that the pandemic got the better of me or that I am talking about the humanitarian Jurassic period of the first half of the 20th century perhaps… But in fact, it is the real story of The Good American-The Epic Life of Bob Gersony, The U.S. Government’s Greatest Humanitarian . I have reviewed a fair share of aid worker memoirs and (auto)biographies during my blogging and Robert Kaplan is a real master in weaving together the life story of Bob Gersony with broader narratives of American foreign policy from the 1970s well into the 2010s with a focus on key humanitarian responses and the institutional politics behind it. It is difficult not to be taken in by the “American dream” that Gersony has built throughout his career: the son of Jewish immigrants who stumbles
Read more

Hi all, Our teaching term is slowly coming to an end and I feel a little bit like this melon vendor in Afghanistan surrounded by student essays & theses ;). I will not post a review next week because of our thesis examinations, but in the mean time enjoy the latest issue featuring Namibia, Canada, UN stuff, Uganda, cli-fi, stories from Myanmar & plenty of open access books! My quotes of the week The knocking is always faint at first. Most people probably wouldn’t be able to hear it, but she knows it’s coming and her heart is ready. It beats in time with the hand behind the door, filling her ears with blood that pounds like an orchestra in her head. The louder the knocking, the louder the musicians. The door always opens after the key is turned to unlock it. There are four, then there are five standing at the step to the door. They look hungry, as if they could eat her. They shake their shiny handcuffs at her. She remembers what is coming next. Her arms are pulled behi
Read more

Hi all, 22 of our ComDev students presented great theses last week, the semester is slowly winding down & your favorite weekly #globaldev review is back with news, reflections, readings & think pieces :) !   Enjoy! My quotes of the week The top ten practices mentioned by interviewed leaders were modelling self-care, openly discussing mental health with staff, recognising the contributions of others, challenging inappropriate behaviour, using their position responsibly and fairly, actively listening to different perspectives, communicating consistently and with authenticity, prioritising the workload, giving people space to do their jobs, and cultivate caring, compassionate organisational cultures. (Leading Well: Aid leader perspectives on staff well-being and organisational culture) On the guidelines enshrined in Nobel rules is that once a prize is awarded, it cannot be withdrawn. So how could the committee express its condemnation of the war and the politics of Abi
Read more

March 27, 2019
My colleagues Lisa Ann Richey , David Simon , Ilan Kapoor & Stefano Ponte with a timely guest post as the International Studies Association ’ s (#ISA2019) annual meeting kicks off in Toronto. The topic is once again the journal Third World Quarterly which is sponsoring the reception of ISA ’ s Global Development Section and the broader questions these discussions raise for higher education and academic publishing. In recent years, universities have been embroiled in debates about the appropriate ways to incorporate social justice concerns into teaching and research. From attempts to place hoax articles in academic journals in order to demonstrate biases in the editorial process to claims that campus activism impinges on free speech , these debates often suggest that radical and progressive politics are responsible for a decline in tolerance and academic standards. But the opposite is often true. Take, for example, “The Case for Colonialism,” an article published by Third World
Read more