On the surface this is just another incident of “satire” gone wrong: Helmut Schleich, a German comedian with a monthly show on Bavarian public broadcaster BR (part of the ARD network of publicly funded broadcaster in Germany) recently showed up in blackface.
As his alter ego Maxwell Strauss he portrayed the illegitimate son of Franz Josef Strauss who had turned into an African dictator of the fictitious “People's Republic of Mbongalo”. So far, so Chinese state television bad. 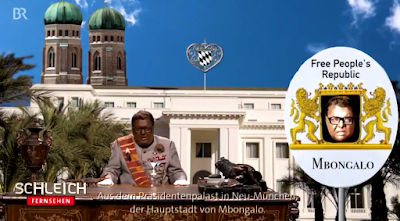 Playing with a lot of stereotypes associated with “Africa”, including corruption and strange diseases, the punchline centers on different word plays with “black”, the color traditionally associated with conservative parties in Germany.
Referring to recent incidents of corruption within the Christian Democratic Party (CDU), Maxwell Strauss advises his German friends that if they want to do justice of being “black” they could take advice from him and install him as their candidate in the forthcoming election to follow Angela Merkel as Chancellor, the guy in the army uniform donning white gloves (“my father always said that corruption is only bad if you get caught”)
For a lot of people over the age of 60 this could be remotely funny, especially for those who remember Franz Josef Strauss, an iconic figure of the political right in West Germany in the 1970s and 1980s.

BR television acknowledged that they not only knew about the skit, but had discussed it with Schleich beforehand only to conclude that comedy can and should be “edgy” and that there is a lot of artistic freedom for such performances-the usual stuff when large bureaucracies are more afraid of an imaginary “cancel culture” than taking responsibility for 21st century TV shows.
Two Tweets from their official account read (my translation):

We asked the editorial office for a statement and they replied: “The character of 'Maxwell Strauss' which has been created by Helmut Schleich is explicitly a caricature of Franz Josef Strauss and under no circumstances aimed at PoC. As a fictitious character it needs to be analyzed within this (con)text. We acknowledge the criticism and will engage with it thoroughly within our editorial office.”

Yep, that's in line with the “your call is important to us” plastic phrase when you call an airline to get a refund...

But the show and the lackluster engagement from BR is merely a symptom of the absence of more thorough debates around racism in many parts of mainstream German media (An All-White Panel on German TV Decided Racism Wasn’t a Big Deal).
It is not only the fact that a white person decides to do blackfacing, but that the alter ego he chose reveals deeply offensive colonial stereotypes: Franz Josef Strauss happily met the South African apartheid regime as late as 1988 (“The liberal Frankfurter Rundschau daily remarked in an editorial today that Mr. Strauss had brought back from South Africa 'a horrifically long list of sins.'” as the New York Times reported then) and in the fictitious part of the process he had sex with an African woman, did not take responsibility for the child and their son would eventually turn into an African dictator.
This is a bit more than “haha, not funny”, but an offensive take on some of the worst aspects of the abuses colonial power, quickly brushed aside by labeling the character a “caricature”.
This is particularly insensitive as only recently debates around Germany's colonial past gained some momentum, especially around responsibility for the genocide in Namibia (if you are on Twitter you should follow Juergen Zimmerer, a professor at the University of Hamburg & one of the leading public voices on Germany's colonial legacies).

I guess one of the reasons why the incident upset me more than it probably should is that these examples are indicative of the state of many public debates and representations in popular media or culture in countries like Germany (I could easily see this happen in Sweden or Denmark...) who believe that they are on the periphery of the broader debates on decolonization that may be centered around the UK or North America. They are not, of course, but entertaining audiences with African dictator tropes and then defending it with a reference to artistic freedom shows how much work still needs to be done before Europeans grasp the concept of anti-racism and decolonization in publicly funded media.

17 April: Bavarian broadcaster BR decided after internal discussions not to air programs with the 'Maxwell Strauss' character in the future (article in German).