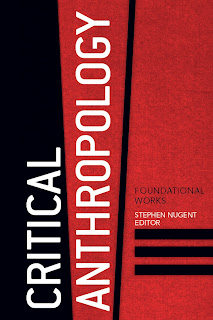 This volume is a collection of articles published in the journal Critique of Anthropology between 1975 and 1991. Its purpose is to illustrate key trends in what is sometimes referred to as “critical anthropology”, a non-dogmatic Marxist turn within anthropology that has strongly shaped the field. [...] Because many of the articles have long been out of print and inaccessible in its original form, this book is a teaching resource, and, for future generations of scholars, a compendium if original arguments that are of continued relevance to the evolution of the discipline (p.7).

Stephen Nugent, the editor of the Critical Anthropology. Foundational Works collection and an editor of the journal Critique of Anthropology, manages to capture the purpose and value of the collection very well right on the first page.
Featuring authors like Andre Gunder Frank, Immanuel Wallerstein, Marshall Sahlins, Michael Taussig and Eric R. Wolf (and basically no female anthropologists-but read my comment at the end of the review), this excellent collection delivers on critical content, but at the same time does not overwhelm the reader and leaves plenty of space for more research, discovery of the authors’ original works and discussions in classrooms, workplaces, organizations, families or where ever such discussions should take place nowadays...Given the current global economic situation this collection is also spot-on in its timing and ‘the discarded political economic focus of the recent past may come to command more attention’ (p.20).

It is beyond the scope of this review to engage in detail with all the different chapters and arguments, but what I found very interesting during the reading and reviewing process was how many ‘meta insights’ and ‘Aha’ moments I gained from the collection with regard to anthropological history and its writing and knowledge discourses.
Most of the original articles were written during an interesting period: By the 1970s anthropology had started to lose some of its colonial and imperial baggage and many chapters reflect this emerging self-reflective and reflexive turn. But even the ‘youngest’ article is more than 20 years old and was published before the digital, global and multi-sited turn which creates an interesting window into an ‘in-between’ period of the discipline. And it is quite interesting to see how the discipline has changed since the early 1990s-and probably even more important how the world around the anthropological universe is changing and constantly challenging critical debates.

Stephen Nugent groups the articles into 7 parts that with one exception consist of two articles each that often engage with the other author’s work. This helps to anchor key debates in the broader discourse, but parts I to IV also read very self-referential at certain points: Mainly white, middle-class, academics talking to each other about their work and how the other did not get it quite right.
In chapter 2 female academic Jojada Verrips becomes the chronicler of a debate between Eric Wolf and Maurice Godelier and even though it took place in 1984 there is absolutely no self-reflection on universities, the emergence of neoliberalism, power relations, let alone any reflections on gender or diversity.

Chapter 3 continues with an interesting, but slightly inaccessible review of Claude Meillassoux’s works (whose first name is not mentioned once in the entire chapter...), complete with lengthy French quotes and an impressive theoretical framework that employs Lenin, Marx and Engels.

However, the final three parts (starting with the aptly named The Crisis of Representation and Writing Culture) address some of these challenges when George Marcus came to the rescue of the discipline:


The literary turn [...] consists of a crucial shift from an observational and empirical methodology to a communicative and dialogical epistemology (p.161).

But the absence of ‘local’ voices or the fact that out of 17 authors (including the editor) only two are female (and critically reviewed male anthropologists’ work) as well as the absence of ethnography from inside the institutions that have created and maintain legitimacy and power over people, research and teaching also gives the reader plenty of food for thought about blind spots and work/writing that still needs to be done.

Despite the reality of Internet technologies, it would have been helpful to add a short biography and overview over the authors’ work, writings and career and round off the historical aspect of the collection.

All in all, Critical Anthropology is an extremely useful collection that delivers plenty of critical inroads into the contents and disciplinary aspects of late 20th century anthropology in the context of Marxist critique and the emergence of a broader self-reflective turn.

Full disclosure: I contacted Left Coast Press about a review copy which they provided in March 2012.