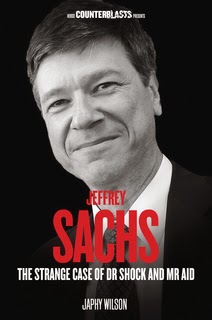 As the recent long interview of Jeffrey Sachs by Tyler Cowen confirmed, Sachs remains one of the most visible, discussed and engaging thinkers of international development.

Starting with his appearance at an ‘Occupy Wall Street’ event, Wilson outlines the purpose of his book:


why was Jeffrey Sachs now railing against neoliberalism, given that had been one of its chief architects and most prominent apologists? (…) It just doesn’t make sense. This is the conundrum that this book explores. (p.4)

As paradoxical as it may sound, the book’s biggest strength is that it ultimately fails to deliver on exploring said conundrum.

While Wilson tries hard to stick to Sachs’s professional and academic career, projects and shifts in thinking he rightly argues ‘that neoliberalism has morphed in tandem with Sachs’s own transformation’ (p.5).
Ultimately, the portrait of one personified ‘Mr Aid’ turns into a mirror for ‘us’, the rest of the development industry. Many of us have undergone similar, less observed personal, professional and organizational transformations; while the book may lose its focus a bit of the person Sachs in the first part it is still an important personalized tale of the modern story of aid.
The story of one man becomes the story of modern development discourses where personal agency and bigger power structures create a constant force field for various battles.

Dr Shock goes to Russia
In the first chapter, The rise of Dr Shock, Wilson provides a good overview over the rise of neoliberalism in the mid 1980s:


In 1985, at just thirty years of age, Jeffrey Sachs was established as a leading macroeconomist of the new free market orthodoxy. (p.15)

The fact that he could establish this position without ‘real world’ experience in policy or development practice is one of the many reminders that being in the right (elite) institutions at the right historical time goes hand in hand with personal ambitions, talents and intellectual capabilities.
The global transformation in the early 1990s, the ‘victory’ of the West over the socialist and communist systems provided a space for Sachs to feel ‘intoxicated with his globe-trotting and highly visible role’ (p.27) as an advisor to the Polish, Russian or Mongolian governments.
When it became apparent that the proposed shock therapy came with huge and long-lasting social and economic cost ‘Dr Shock’ tried to escape these complexities and shadows:


Like Doctor Frankenstein, Sachs’s entire subsequent career can be understood as a series of increasingly desperate and ultimately futile attempts to escape this monster of his own creation. (p.48)

Mr Aid goes to Africa
The second half of Wilson’s book focuses on Sachs’s development career and its most prominent feature, the Millennium Village Project (MVP).
I found this the strongest part of the book, although the critique of the MVP and Sachs’s engagement in development practice is not new. Wilson clearly points out that


the political function of Sachs’s anti-poverty agenda is not to challenge the global status quo but to reinforce it by depoliticizing inequality and reducing development to the administration of survival. (p.63)

But what this part of the book also highlights is that Sachs is once again at the right places for the shift of development discussions into a broader socio- maybe even pop-cultural sphere: The rise of Jeffrey Sachs is also the rise of philanthrocapitalists, celebrities and a discourse that regards corporate engagement in development as a key pillar beyond the ‘market reforms’ of the 1990s.


The MVP functions ideologically by presenting a fantasy image of capitalism without contradictions. There are no exploitative relationships among the ‘villagers’, or between them and the billionaire philanthropists funding their survival (…) and the project has proved extremely appealing to a remarkable array of celebrities, billionaires, and multinational companies. (p.78)

Wilson’s analysis of the MVP, including reflections from his own fieldwork in Uganda, is detailed and convincing and highlights the schizophrenic enterprise of contemporary development really well: Sachs is an enabler, but maybe more importantly an amplifier of mainstream shifts in funding and thinking. There is symbiotic relationship between the need for funding for his flagship institution the Earth Institute and his projects and the willingness to fund uncontroversial, high-profile initiatives. But the question remains whether the real subversion lies in the many projects that are not part of this powerful discourse and with those who simply ignore Sachs and other high-profile development experts?

Our schizophrenic relationship with development
The very fact that a book about one person, one economist, development expert or whatever other label you like to apply to Jeffrey Sachs can occupy a legitimate, relevant and interesting space says a lot of how much ‘development’ has changed into a socio-cultural phenomenon.
Aid is now personalized, celebritized, publicized in new and different ways – and at the end of the day aging white economists are still calling powerful shots in academia, policy and beyond. Toward the end, the book sometimes moves into the psychoanalytical realm that I find too speculative and less helpful without the empirical material of long personal interviews let alone psychological analysis.
Development has always been a bit schizophrenic and after years and decades in the aid business most people become a bit ‘crazy’…

From a teaching point of view, I would recommend the book as a good alternative to many of the ‘history of development’ books that often remain abstract and theoretical to students. By critically engaging with the person Jeffrey Sachs we are all challenged to think broader and deeper about the meaning of ‘development’ as discourse and practice.

It is easy to point the finger at Sachs, complain about development as a broadcasting as much as a poverty-reduction project that was highjacked by ‘neoliberalism’ and then write a book about it or a book review on a development blog.

‘We’ are not simply bystanders or victims of the Reagans and Thatchers of the 20th century, but most of the time will buy into the existing structures even a little bit or for a short while. The person/professor/human being Jeffrey Sachs is changing development as much as he is changed by the developments of development. Somehow, we are all a little bit like Jeffrey Sachs...